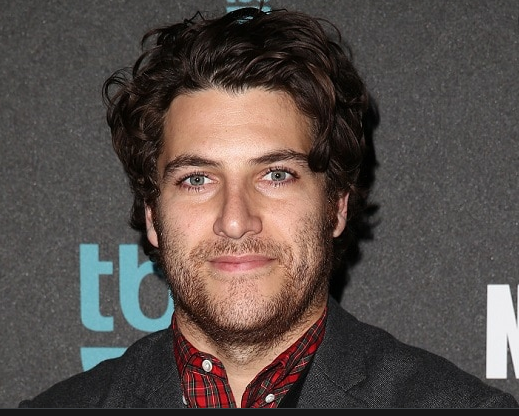 Who is Adam Pally?

Adam Saul Pally is an American eminent actor, comedian, writer, and producer. He is most notably known for starring as Max Blum in the ABC comedy series Happy Endings and as Dr. Peter Prentice in The Mindy Project. Moreover, he starred in the FOX comedy Making History and was the executive producer of The President Show.

How Old Is Adam Pally?

He is 40 years old as of July 2022, having been born on March 18, 1982, in New York City, New York, U.S. Adam shares his birthdate with celebrities such as; Brooke Norris, Adam Levine, Lily Collins,  Maesi Caes, Saiko, and many more.

Who are Adam Pally’s Parents?

He was born to Steven Pally (Father) an internist who owns his own medical office. And Cary Pally (Mother) managed the practice in Florham Park, New Jersey.

Does Adam Pally have Siblings?

He has two sisters by the name Erica Pally and Risa Pally.

He received his high school education at Golda Och Academy. Later, he graduated from The New School University in New York City in 2004.

He is married to the love of his life Daniella Liben. They married on July 3, 2008.

He has made appearances in films such as Iron Man 3, Taking Woodstock, Solitary Man, Assassination of a High School President, The To Do List, and A.C.O.D. and Slow Learners. Moreover, he has made guest appearances on Last Week Tonight with John Oliver, Californication, and The Colbert Report. Also, he has written and appeared in the Adult Swim series NTSF:SD:SUV::. It was reported in 2012, that he and frequent collaborator Gil Ozeri wrote a script being produced by Will Ferrell & Adam McKay’s company Gary Sanchez Productions.

He then starred as Max Blum from April 2011 to May 2013, one of the lead characters on the ABC ensemble comedy series Happy Endings, alongside Eliza Coupe, Elisha Cuthbert, Zachary Knighton, Damon Wayans Jr., and Casey Wilson. Because of his work on season three of Happy Endings, in 2013, he was nominated for “Best Supporting Actor in a Comedy Series” at the Critics’ Choice Television Awards. In July, the cast reunited for the pandemic-themed episode “And the Pandemmy goes to… to raise money for the charities Color of Change and World Central Kitchen.

In 2013, following the cancellation of Happy Endings, he joined the cast of The Mindy Project as a series regular for the second and third seasons, playing the role of Dr. Peter Prentice. He then left the show midway through the third season, thus making his final appearances in 2015 as a series regular. Next, he filmed a lead role episode opposite T.J. Miller and Thomas Middleitch in the comedy Search Party. The film serves as the directorial debut of screenwriter Scot Armstrong. In 2015, he starred both in the indie films Slow Learners and Night Owls.

A Media Contributions and Appearances

Besides acting, he is a regular contributor to the humor website Funny or Die, where he is best known for his series Riding Shotgun with Adam Pally, where he interviews celebrities in his car. He went on to create for UCB Comedy a parody in 2009 of the “David After Dentist” internet phenomenon: his is called “David After Divorce”, and he speaks almost exactly the same lines as David, though to a different set of questions.

On YouTube, it has received about 5 million hits. In 2011, he co-starred in the comedic stage show The Realest Real Housewives, created by his Happy Endings co-star Casey Wilson. In addition, he has appeared regularly on many podcasts on the Earwolf network such as Comedy Bang Band!, improv4humans, Who Charted, and How Did This Get Made? He and fellow comedian friends Gil Ozeri and John Gemberling gained attention on June 5, 2015, when they teamed with Funny or Die to live-stream their 50-hour marathon of Entourage, watching every episode in a row with no breaks for 50 hours straight.

Adam Pally’s Salary and Net Worth