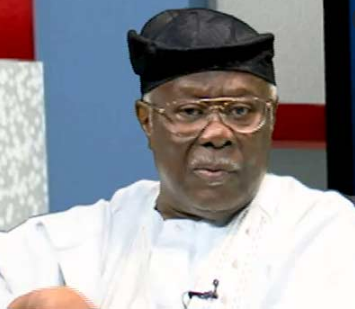 Who Is Bode George?

Olabode Ibiyinka George “Bode George” is a Nigerian politician who served as the Military Governor of Ondo State, then as Chairman of the Nigerian Ports Authority, and finally as the People’s Democratic Party’s Southwest Zone Vice-Chairman (PDP).

Bode was born in Lagos on November 21, 1945. He has a B.Sc. and an MBA. Bode George joined the Nigerian navy as a Commodore and was later named Military Governor of Ondo State (1988–1990). According to the African Concorde newspaper, George treated state resources like his own, spending lavishly and awarding inflated contracts in exchange for large kickbacks.

What Got Between Tinubu and Bode George

Lagos State Governor Bola Tinubu remarked in a July 2002 interview, “Bode George was required to appear before a criminal court for his actions in Ondo state. He stated “Bode George and his comrades who believe in military arbitrary must be told in no uncertain terms that their time has passed and that we are now living under a democracy.

In response, PDP Chairman Alhaji Muhammed Muritala Ashorobi claimed that Bode George had an impressive record as governor of Ondo State and that the structures he built were important landmarks.

By edict in 1990, he founded the Rufus Giwa Polytechnic, Owo, a college with nearly 4,000 students. He was attacked while governor at a ceremony at the University of Lagos (UNILAG), where he is an alumnus.

Between 1993 to 1997, he served as the Principal Staff Officer under General Oladipo Diya, who was the Chief of General Staff at the time. George worked at the Nigerian National War College as a Director (NWC).

In 1999, George was named Chairman of the Nigerian Ports Authority. During a visit to the Delta ports in February 2001, Bode George called for increased security and discussed the issue of large sums of money owed to the port authority by companies like the Petroleum Products Marketing Company, Nigerian National Shipping Line, Delta Steel Company, and Central Water Transport Company.

George stated in April 2001 that one of the causes of port congestion was importers’ slow clearance of goods due to fear of seizure. To alleviate traffic congestion, Bode George called for the construction of new dry ports and warehouses in May 2001.

To free up space in the Lagos seaports, Chief Bode George ordered that all empty containers be moved out in September 2001. In July 2002, he urged truck owners on strike over cargo clearance at Lagos ports to return to work.

When the current government took power in April, George praised the Grimaldi Group for investing in Nigeria and stated that the NPA would expand the RORO port to address the shortage of berths for ships.

“The illusion that the NPA is a buoyant and bottomless source of funds, which has encouraged a culture of carefreeness in the handling of contracts and materials, the unwarranted external influences to procure materials and equipment that are not required for the needs of our operations, lack of proper stock-taking and modern store management procedures, the poor maintenance and management of our as-built facilities,” Bode George said in August 2003, referring to plans to privatize port operations.

The Nigerian Ports Authority’s senior management and board were fired in October 2003. Chief Adebayo Sarumi, the new managing director, hired auditors to review major existing contracts. Irregularities were discovered during their investigation. It was passed to Nuhu Ribadu’s Economic and Financial Crimes Commission, which began investigating in 2005.

George was close to President Olusegun Obasanjo, and he was given first priority in the selling of Lagos state homes. George was elected as the PDP’s national vice-chairman for the southwest zone in 2001. He later rose through the ranks of the PDP to become the South’s Deputy National Chairman and then the party’s National Deputy Chairman.

At a March 2001 rally, George appeared to endorse Chief Funsho Williams, the runner-up in the Alliance for Democracy (AD) party’s 1998 Lagos State governorship primaries, as the PDP’s candidate for the 2003 governorship election. Williams later switched to the People’s Democratic Party (PDP).

In February 2002, in response to allegations that the PDP was levying fees on political candidates, Bode George stated that the party had never issued such a directive and that anyone caught doing so would be arrested and turned over to the police.

Nick Mbaezue, the leader of the Anambra People’s Forum (APF) arm of the People’s Democratic Party (PDP) in Anambra State, accused Bode George of auctioning the PDP executive to the governor’s faction in August 2002.

In January 2003, the founding chairman of the Peoples Democratic Party in Lagos State, Chief Olorunfunmi Bashorun, and other leaders petitioned the National Chairman about a party crisis. They accused Alhaji Murtala Ashorobi, George’s client, of favoritism.

George denied any involvement in the reported detention of Lagos State Governor Bola Tinubu and two other former governors in April 2004. The three were detained by soldiers and policemen while attending a funeral in Iyin-Ekiti.

A splinter group within the PDP accused Bode George, the party’s southwest chairman, Senator Adeseye Ogunlewe, and Mohammed Ashorobi, the state chairman, of breaking up the party through intimidation, blackmail, discrimination, and abuse of power in June 2004.

In July 2004, Anambra State’s house of assembly announced that Governor Chris Ngige had resigned and that the deputy governor, Okey Udeh, should take his place, only to later reverse their decision, claiming that they had been deliberately misled. A PDP panel led by Bode George recommended that Okey Udeh resign.

Bode George was expected to be named National Chairman of the PDP at the party’s national convention in November, according to This Day in January 2005. He was promoted as PDP Deputy National Chairman in July 2005. (South). Olabode George demanded the resignation of Vice President Atiku Abubakar, who had defected to the Action Congress (AC) party, in February 2007.

Bode George With The EFCC

Olabode George threatened legal action in April 2005 in response to a newspaper report that an N85 billion scam had been discovered at the Nigerian Ports Authority (NPA) while he was chairman of the board. He called the accusation “insane,” “baseless,” and “thoughtless.”

He was charged with fraud at the NPA by the Economic and Financial Crimes Commission (EFCC) when it was led by Nuhu Ribadu. President Olusegun Obasanjo, on the other hand, was widely rumored to have sheltered him from prosecution.

According to an EFCC report released on April 1, 2005, NPA board members, including Chairman Bode George, and the NPA’s management should be held accountable for deliberate and flagrant violations of government rules and regulations governing contract award and should be sanctioned for contract splitting and inflation of contract price in blatant violation of government rules and regulations. The findings were dismissed by President Obasanjo as inconclusive, and he ordered a new investigation. Bode George was found not guilty in the second EFCC report.

The EFCC invited Bode George to a meeting in November 2005 to discuss a party issue in which his name had come up. In March 2006, the Alliance for Democracy (AD) called on President Olusegun Obasanjo to prosecute Olabode George, the PDP’s Deputy National Chairman, and the NPA’s board and management over allegations of frivolous contract awards totaling N60 million.

While he was chairman of the NPA, the EFCC, led by Farida Waziri, arrested Olabode George in Lagos in August 2008 and arraigned him and four others on a 163-count charge of conspiracy, disobedience to lawful order, abuse of office, and alleged illegal award of contracts worth N84 billion.

The EFCC reduced the charge to 63 counts after the trial began. Bode George was found guilty and sentenced to 30 months in prison in October 2009. Justice Joseph Olubunmi Oyewole handed down the sentence.

On 47 of the 68 counts, the judge found the defendants guilty. The total sentence was 28 years, but the counts for disobedience to a lawful order were ordered to run concurrently for six months, and the counts for contract inflation for two years.

George’s attorneys filed an appeal and asked for bail until the outcome of the case. The court, however, dismissed the appeal. Chief Bode George and his colleagues were assigned to the V.I.P. sector of the prison as inmates. They weren’t compelled to wear prison uniforms and could eat meals made by their family.

The Supreme Court overturned Bode George’s conviction on December 13, 2013. The court presided over by judge John Afolabi Fabiyi, ruled that the EFCC had no proof that George intended to defraud the NPA, and that the claims of “contract splitting” were unfounded.