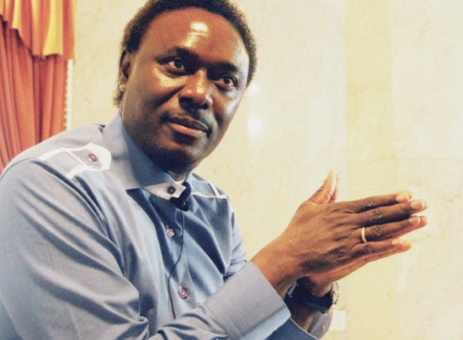 Christopher Oghenebrorie Okotie also known as Chris Okotie (born 16 June 1958). Was born in Ethiope East, Abraka, Delta State, Nigeria. He is a Pastor and also a Politician living in Lagos state. He is at the age of 64 year @ 2022. Chris was born by a beautiful Family, Francis Idje and Cecilia Okotie, in Ethiope-West, Delta State.

Who Is Chris Okotie

He has been the pastor of the Household of God Church International Ministries, in Lagos State, Since February 1987. He is the present head of a Political Party called, Fresh Democratic Party (FDP) In Nigeria. He rise the motion of interest to become the president of Nigeria 2022. Ahead of the 2023 Presidential Election, appealing to Atiku and Tinubu to Step down for him.

Okotie was born in Ethiope-West, Delta State, to Francis Idje and Cecilia Okotie (then Bendel State). He had always enjoyed singing as a child. He was a member of the school’s Music Club while in high school at Edo College in Benin City, and he frequently entertained groups of people. He didn’t consider commercializing his talent until his father died in his first year of university. Jogging, martial arts, and music are among his interests.

Christopher Oghenebrorie Okotie was born on the 16th day of June 1958. He is currently at the age of 64 years old at the year of writing this post 2022.

Pastor Chris Okotie actually got married to two wives whom he eventually divorced them, after some misunderstanding between each other. He divorced Stephanie Adie Henshaw in 2012. She is from Cross River state, Nigeria. While he divorced Tina Okotie in 2001. Chris actually made a final decision of never getting married.

Okotie was born in Ethiope-West, Delta State, to Francis Idje and Cecilia Okotie.

He went to Edo College in Benin City for secondary school. He earned a law degree from the University of Nigeria in Nsukka in 1984. Okotie took a break from school to pursue a pop music career before quickly returning. On June 24, 2012, Okotie stated that he has separated from his second wife.

He went back to school to finish his study and earned a legal degree. While attending law school, he took a break from his studies to establish his religious ministry. Okotie went to Grace Fellowship Bible School in Tulsa, Oklahoma, and founded the Household of God Ministry shortly after. In 1990, Okotie launched the annual Karis Awards, which are hosted by his church and honor Nigerian citizens.

Late. T.B. Joshua, a fellow Nigerian priest, had a public disagreement with Okotie, who referred to him as a “deceptive magician.” In 2021.

His Contest For Presidency

After being schemed out of the National Democratic Party (NDP) primaries, Okotie campaigned for President under the banner of the Justice Party (JP), sponsored by Ralph Obiorah; he lost to Olusegun Obasanjo in the May 2003 elections.

In 2007, he ran again on the platform of the Fresh Democratic Party, FRESH, which he created, and lost to Umaru Yar’Adua in the May 2007 elections. Then, in 2011, he stood for President and lost to Goodluck Jonathan.

Stephanie Adie Henshaw has never been married before Reverend Christopher Okotie in the true sense of the word, as far as anyone knows except close friends. The mother of three children by two men has been a victim of violence and bad luck, with a tumultuous history of marital difficulties that have shattered her delicate heart.

Stephanie’s first love, prior to meeting Okotie, was a young man she met through a mutual friend in Lagos. Despite having no intention of marrying and being relatively young at the time, the naive Calabar girl became pregnant for the man.

When he was killed in Surulere, Lagos, she was still carrying his child. Stephanie’s hat would die in a tragic accident years later.

“After the loss of Stephanie’s first child’s father, they inflicted excruciating grief on her. The man’s family approached her one day to inquire about the child’s well-being. They took custody of the child before she even realized what was going on. “She didn’t see the boy until two or three years ago,” a trustworthy source informed ENCOMIUM Weekly.

We also learned that Stephanie’s son was sent to England to be educated before returning to the United States. He and his mother have subsequently reunited.

Stephanie Henshaw’s affair with one businessman, Mazi Okechukwu (Okey), was entirely based on deception, which the ravishingly beautiful lady was initially unaware of.

Stephanie had no idea Okey was a liar. Okey revealed to her that he was not married. He was building a house in Omole Estate at the time. Stephanie had rented a property in Ikeja, Lagos, from Okey. And he pretended to have gone to see his mother every time he sneaked out to see his first wife and children. “She literally fainted the day she found out the truth,” our insider claimed.

Rev.Okotie, who had been admiring Stephanie from afar, began stepping into her life in the midst of this romance that produced two sons.

She was naturally enraged with the Igbo businessman, and she desperately needed a man she could call her own, according to ENCOMIUM Weekly. According to what we were told, Okotie put his reputation on the line and risked his life in order to have Stephanie.

“He had a thing for Stephanie.” There was nothing he wouldn’t go to in order to help her. For the sake of this love, Okotie had to leap over a fence. Of course, as you are aware, he was physically assaulted on several occasions, all in the name of Stephanie.

“This was the same Okey who smashed Okotie’s windscreen and everything.” When it became clear that Stephanie was no longer interested in the relationship, he had no choice but to give up. After all, since there was no marriage, to begin with, there was no need to dissolve it.”

Stephanie has been a born-again Christian for almost 20 years, and we were told that despite her marital problems, she has always known God.

Those who are criticizing Stephanie should keep their calm, according to a source who has known her for a long time. If pushed to the limit, she threatened to reveal even more details about her four-year marriage to Rev. Okotie.

Stephanie had previously left the impression that she was a widow and divorcee in the minds of those who knew her. an accusation that her close friends and family members are currently working hard to disprove.

In related news, more details are emerging, shedding light on the remote and immediate circumstances that led to her marriage to Household of God’s Chris Okotie collapsing on Sunday, June 24, 2012.

According to the information we have, Stephanie was not attending church as frequently as she was required to as the pastor’s wife. She had also been accused of being obstinate, and they had also accused her of being bisexual.

Mr. Ladi Ayodeji, Rev. Chris Okotie’s image maker, said they have no comment on any issue related to the Okotie/Stephanie marriage break-up in a response to ENCOMIUM Weekly’s inquiries on the issue the same day.

“On this subject, we have nothing to say.” Please feel free to write whatever it is that you want.”

Meanwhile, Rev. Okotie has remained silent on why his marriage to Stephanie unexpectedly ended. At the Household of God’s midweek service on Wednesday (July 11, 2012), he said nothing about the matter.

On Sunday, July 15, 202, the situation was the same. The charismatic preacher, dressed in black trousers, a white shirt, and a checked coat, was focused on the day’s message, which was about God’s power of delivery.

And, as has been the case since he divorced his wife, the church was packed to the brim. Members born in July were unable to deliver a drama, No Gossip in the House, which they had previously announced for that Sunday service before the church dismissed at 1.30 p.m.

The fifth Sunday of the year is July 22, 2012. Okotie’s four-year marriage to Efik, Cross River native Stephanie Adie Henshaw ended in divorce. The pair have made no official statements about their marital problems.

Reverend Okotie has been deafeningly quiet about the situation since his June 24 pronouncement, while Stephanie has only mentioned her marital woes in a recent Facebook status. Encomium Magazine is the source of this information.

Okotie is also an Author, he has published books and is a regular contributor to several Nigerian newspapers. See his publications below:-