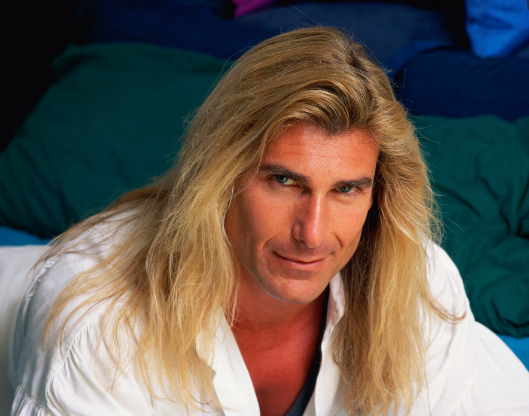 Fabio (Fabio Lanzoni) is an Italia- American Fashion model, actor, and spokesperson who is known for a wide-ranging career which his appearance as a spokesperson for I can’t Believe It’s Not Butter! and the American Cancer Society.

He started his career after he was discovered by a photographer while he was working out. After that, he got a role of Claudio in the syndicated TV series Acapulco H.E.A.T. After that he was featured in calendars a fragrance campaign for Mediterraneum by Versace and in addition, he got a role in a commercial for ” I Can’t Believe It’s Not Butter”.

Lanzoni also appeared in Bold and Beautiful a couple of times as a close friend of Sally Spectra. However, Fabio and the late Darlene Conley who was Sally Spectra were friends in real life not only in the movies. During the Step by Step series, Fabio appeared in one episode which was known as “Absolutely Fabio”. He appeared on the Big Time Rush and Ned’s Declassified which aired on Nickelodeon. Fabio played as a Captain Hawk in an episode of The Suite Life on Deck which was known as “Senior Ditch Day” in 2010. Films like Zoolander, Dude, Where’s My Car? and Spy Hard were some of the Cameo done by Fabio.
Fabio released an album which was called Fabio After Dark in 1994, The album included soliloquies on his philosophy of love.

In 1989, video game Ironsword: Wizard & Warriors II for the Nintendo Entertainment System, he appeared as the hero Kuros on the cover of the Game. In 2005 he hosted the American reality TV series, Mr. Romance.  Mr. Romance series featured twelve males who were competing for the title of “Mr. Romance” and also a chance to appear as a romance novel cover model. Together with Eugena Riley, the duo has written series of historic romance novels such as Rogue, Pirates, Viking, and Champion. After that, they collaborated with Wendy Corsi Staub and they wrote other three books including Dangerous, Wild, and Mysterious. In 1992 Robert Gottlieb became Fabio’s literary agent.

He is the son of Flora Carnicell Lanzoni and Sauro Lanzoni. His father was a mechanical engineer and owned a conveyor belt company. He was raised in Catholic where he served as an altar boy.

He has two siblings Walter and Cristina. However, his sister died in 2013 due to Ovarian Cancer.

Information regarding where Fabio received his high school/college education is still private.

Despite him being 62 years old Fabio has never been married. However, he currently dating Larissa Meek. The two have been dating since 2001 and they have been together for 20 years.

During I Can’t Believe It’s Not Butter! Fabio appeared prominently and since then he has been the company Spokesman. In 2007, he became the spokesman for the Geek Squad and in 2006 he became a spokesman for the Ora-B’s Sensitive Advantage Toothbrush whose Ads were also featured in Time Square. His most famous Ads until today are for Nationwide Insurance.

During the Super Bowl, the Nationwide commercial aired in 2016 and it was one of the most viewed commercials for the game getting over 1million views in just two weeks. Old Spice launched a campaign on YouTube in July 2011, where Fabio challenged Isaiah Mustafa to try and replace him as the New Old Spice Guy.

The challenge was titled Mano a Mano en el Bano which meant hand-to-hand in the bathroom. However, Isaiah won the challenge, though Fabio Old Spice YouTube Channel received more than 9 million views in just two weeks after it was launched and it became No. 4 on YouTube for the week.
While he was a spokesman for the American Cancer Society, he spoke on controversial Burynski Clinic where his sister was receiving treatment for Ovarian Cancer.

In April 2013, Fabio stated in an interview that he was a genius and he believed he had a cure for cancer and they had to let him geet his office back and let him do his work. However, his sister died in August 2013.

Fabio launched his own clothing line at Sam’s Club in 2003 which was casual wear for women. Before his clothing line, he created a workout video and also wrote a book called Fabio Fitness. After that, he launched a Healthy Planet Vitamin in 2008. The company was selling whey protein, glutamine, and colostrum products.

He has no children

Adding to his well build body the 62-years-old stands at 1.9m tall and weighs 102kg.

Fabio has a Net Worth of $16 million.