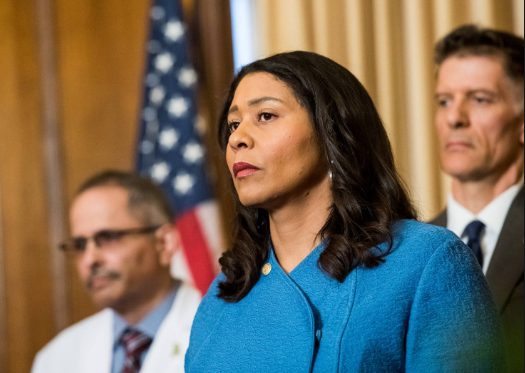 Who is London Breed?

London Breed (London  Nicole Breed ) is an American politician and 45th mayor of the City and County of San Francisco. Previously, she was serving as a supervisor for District 5 and was president of the Board of Supervisors from 2015 to 2018.

Moreover, growing up in San Francisco’s Western Addition, she served in the government after graduation. In 2012 she was elected to the Board of Supervisors after being elected she took office in January 2013.

After serving for three years she was elected president in 2015. Following the death of Mayor Ed Lee, Breed became the acting mayor of San Francisco as head of the Board of Supervisors, pursuant to the municipal law.

In order to fill the gap left by Ed Lee, Breed was elected mayor of San Francisco in a special election conducted on June 5, 2018. In addition, Breed is the first Black-American woman to be elected mayor of San Francisco, the second African-American after Willie Brown, and the second woman after Dianne Feinstein. After winning the special election she took the oath of office On July 11, 2018.

She began her career as an intern in the Office of Housing and Neighborhood Services for Mayor Willie Brown. She became the executive director of the African American Art & Culture Complex in 2002.

In addition, as an Executive director, she raised more than $2.5 million to refurbish the complex’s 34,000-square-foot facility. The facility included an art gallery, theater space, and a recording studio. Moreover, In 2004, Breed was appointed to the San Francisco Redevelopment Agency Commission.

In addition, she was nominated by  Mayor Gavin Newsom in 2010 to the San Francisco Fire Commission.

How Old Is London Breed?

Who are London’s Parents?

She was born in San Francisco, and she was raised by her grandmother. However, she has managed to keep information about her parents’ background private.

She has two siblings, her brother Napoleon Brown is currently in jail serving a 44-year sentence for a 2000 manslaughter and armed robbery conviction. In addition, her younger sister died due to a drug overdose.

She attended Galileo High School, where she graduated with honors. After that, she enrolled in the University of  California, Davis graduating in 1997 with a bachelor’s degree in political science-public service. She went ahead and earned her master’s degree in public administration from the University of San Francisco in 2012.

Currently, she is not married and she has kept information about her love life. However, there were reports that she was in a relationship with Mohammad Nuru, a San Francisco Department of Public Works director.

Currently, there is no information about her kids, in case of any information, we will update it as soon as possible.

London was elected to the District 5 supervisor in November 2012. This was after she defeated incumbent Christina Olague, who had just been appointed to the position by Mayor Ed Lee that year.

London won by more than 12 points after five rounds of ranked-choice voting assignments, becoming the first challenger to upset a district supervisor in San Francisco history.

Breed took the oath of office as Supervisor of District 5 on January 8, 2013. She was sworn in by then-California Attorney General Kamala Harris. In addition, she was elected President of the San Francisco Board of Supervisors on January 8, 2015, first by a vote of 8 to 3 and subsequently unanimously. She defeated her opponent, supervisor David Campos, who was also nominated for the job.

In addition, after being elected she took the office from District 4 Supervisor Katy Tang. Tang was temporarily holding the position after David Chiu stepped down to serve in the California Assembly.

Moreover, Businessman Derf Butler was videotaped talking about allegedly paying for access to Breed. This was part of an FBI investigation into governmental corruption and bid-fixing, particularly involving then-State Senator Leland Yee. In addition, Butler told an FBI source in 2015 that he “pays Supervisor Breed with untraceable debit cards for apparel and travel in exchange for advantages on the job.” However, London denied the claims and said she had no role in contract selection. Furthermore, no evidence has ever been presented to substantiate the claims.

in February 2016 Breed declared her bid to run for reelection to represent District 5. Moreover, in her statement, she outlined the top concerns as constructing and preserving affordable housing, boosting public safety, improving environmental health, and upgrading public transit.

In the general election, she faced Dean Preston, an attorney. On November 8, 2016, Breed won reelection with a 52 % to 48% margin. On January 9, 2017, Breed was overwhelmingly re-elected to a second two-year term as Board President.

Supervisors Aaron Peskin, Jane Kim, and others are considered to be the board’s progressive members. Sought to deny Breed the benefits of incumbency going into the election and to maintain a separation of powers between the positions of mayor and board president, both of which Breed held at the time.

In addition, she was among the candidate who competed in the June 5 Mayoral special election. She received 35.6% of the first-place votes in the original count, with Mark Leno receiving 25.9% and Kim receiving 22.8%. However, after the initial counting of ranked-choice ballots, Leno regained the lead early the next day but Breed retook the lead on June 9.

Leno conceded defeat and congratulated Breed on her victory on June 13, with 9,000 ballots yet to be counted. After being elected as Mayor Breed stepped down as president of the Board of Supervisors on June 26, 2018. Moreover, Malia Cohen was then elected in a unanimous vote by the Board. However, London remained as District 5 supervisor until July 11, when she was elected mayor.

Moreover, in the 2019 mayoral election, she ran for a full term. She was running against five unknown candidates. She won the election.

Moreover, in March 2019 Breed presented a posthumous certificate of honor to Sinn Féin politician and former IRA member Martin McGuinness for his “courageous service in the military.” The nomination came from the United Irish Societies, which had named him an honorary marshal in the St. Patrick’s Day parade. Following the uproar, she issued an apology two days later.

During the 2020 Democratic Party presidential primaries, she endorsed Mike Bloomberg on January 23rd, 2020.

Her height, weight, and body measurement are not available, in case of anything the information will be updated as soon as possible.

Her Net worth is estimated to be above $1 million