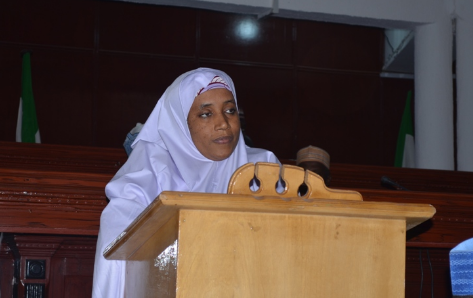 Who is Badiyya Hassan Mashi?

Badiya Hassan Mashi is an academic, permanent secretary, and current commissioner for Women Affairs and Social Development in Katsina State.

How Old is Badiyya Hassan Mashi?

She was born on the

Where is Badiyya Hassan Mashi From?

She is from Katsina State

Badiyya Hassan was born and raised in the Mashi local government area of Katsina. She attended Gidado Primary School in Katsina town, the Government Girls Secondary School (GGSS) in Malumfashi, and Bayero University Kano where she graduated with an upper-second class BSc microbiology and an MSc and Ph.D. in environmental microbiology.

She was once a principal lecturer at Hassan Usman Katsina Polytechnic in the department of Basic and Applied science, from 1992 to 2016, and a visiting lecturer at Umaru Musa Yar’adua University. As commissioner for Women Affairs and Social Development, she organized a rally addressing issues on how to tackle drug abuse. She said “Women and mothers must be seen to be doing the right thing, especially in close monitoring their wards to know who they hang out with and what they do in their private time. We are going from house to house to educate parents.”

She committed 196 million naira for the empowerment of vulnerable children, orphans, and women in 34 Katsina State local government areas.