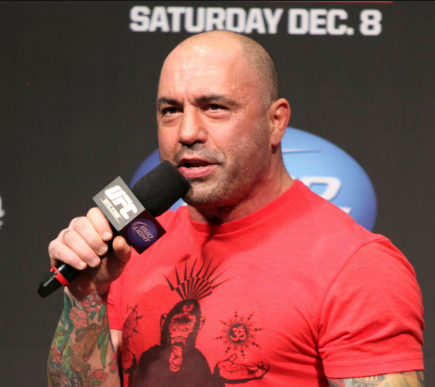 Who Is Joe Rogan?

Joe Rogan (Joseph James Rogan) is a comedian, podcast host, and UFC color commentator from America. Joe has also worked as a TV host and actor.

He started his career in comedy back in 1988 in Boston. In 1994 he relocated to Loa Angeles, where he signed a development deal with Disney, and he appeared. He has also appeared in different Tv shows including Hardball and NewsRadio. Moreover, in 1997 he started working at the Ultimate Fighting Championship ( UFC) where he was working as an interviewer and color commentator. In 2000 he released his first comedy special 2000, after that he became a host of Fear Factor from 2001 to 2006. He then went ahead and launched his podcast known as The Joe Rogan Experience, which made brought him into the limelight and a Podcast Superstar.

After Fear Factor, he concentrated more on his stand-up comedy on television. He hired two people to film him and his comedy friends on tour and released clips on his website for his Joe Show Web series. Furthermore, in 2005 he signed a contract with the Endeavors Talents Agencies. After that, he filmed his second stand-up comedy special called Joe Rogan: Live, in Phoenix, Arizona. The special aired on Showtime in 2007.

Moreover, he hosted the short-lived CBS show Game Show in My Head, the show aired for eight episodes in January 2009 and it was produced by Ashton Kutcher. In 2010 he has involved a feud with Dane Cook after he accused him of jokes thievery. Still, in 2009, they began a free podcast with his friend and fellow comedian Brian Redban. IN 2010, The podcast was named The Joe Rogan Experience and entered the list of Top 100 podcasts on iTunes.

In 2011, he went back to being the host of the Fear Factor while it was on its Seventh and final season, the show went on until 2012. After that, he landed a film role in 2011, in the comedy film Zookeeper. He has worked on a book called Irresponsible Advice from a Man with No Credibility. Furthermore, he was featured in another film called Here Comes the Boom, where Kevin James was the Starring and it was released in 2012.

2012, he released his sixth comedy special Live from the Tabernacle. The special was available for download on his website for as low as $5. He was inspired by Ck to release it as it was after CK released the same thing.

In 2013 he was hosting a television called Joe Rogan Question Everything on the SyFy network. The show premiered for six episodes.

He was born in Newark, New Jersey to Joseph who is a former police. His parent divorced while he was still five and since then he has never been in contact with his dad.

Rogan has one sister, however, the two don’t get along since she doesn’t like it when Joe calls his dad abusive.

He attended the Newton South High School in Massachusetts, where he graduated in 1985, while in High school he participated in Little League Baseball, however along the way he developed interest in martial arts. After high school he joined the University of Massachusetts Boston, however, he didn’t complete his studies as he later dropped to do other ventures.

He got married in 2009 to Jessica Ditzel, who was then a cocktail waitress.

The couple welcomed their first born-daughter in 2008 and their second-born daughter in 2010. Furthermore, he is also a stepfather to Jessicas daughter from her previous relationship.