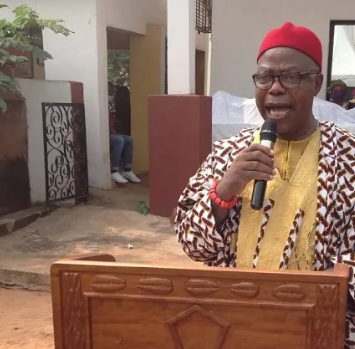 Peter is from Anambra state, Nigeria. The former justice of Anambra state judiciary. He was born into a good-hearted family, and he is happily married with kids.

Peter is a politician and he has successfully won the APGA Primary Election for the 2023 presidential election, he was the former Chief Judge of Anambra State Judiciary.

Peter Umeadi, the Chief Judge of Anambra State, has emerged as the All Progressives Grand Alliance’s presidential candidate (APGA).

On Wednesday, Justice Umeadi, the APGA’s single presidential candidate, was declared the winner of the party’s primary election.

At a special convention of the party convened in Abuja, the nation’s capital, 150 delegates voted in favor of his candidacy.

Following his retirement as the state’s Chief Judge in March 2019, Umeadi, a Professor of Law at the University of Nigeria, joined the party in his Nri Ward II in Anaocha, Anambra.

He had said that he decided to get involved in partisan politics in order to keep his brain active, claiming that those who retire and sleep have their brains asleep.

The former chief justice has long advocated for a Nigerian from the south-eastern region to be elected president.

According to him, the Igbos have the highest level of investment in the country, and it is critical that Nigerians back them in their presidential campaign in 2023 for the sake of all Nigerians.

Later, Umeadi met with APGA leadership and formally proclaimed his intention to run for president on the party’s platform in 2023.

While seeking the party’s blessing, he emphasized that only good leadership can bring about the much-needed change in Nigeria.

As a result, the former top judge stated that he was ready to provide outstanding leadership to the country and put it on a road of economic and economic prosperity.

An excerpt from PunchNews reads:

A former Chief Justice of Anambra, Prof Peter Umeadi, on Wednesday emerged as the presidential candidate of the All Progressives Grand Alliance in the 2023 election.

Umeadi, who was unopposed became APGA’s presidential candidate at the party’s convention in Abuja which was attended by its leaders and members from the nation’s six geo-political zones.

The News Agency of Nigeria reports that the party delegates affirmed his candidacy by a voice vote.

APGA National Chairman, Dr. Victor Oye, who expressed optimism that Umeadi would be sworn in as President in 2023, said that the party would also produce more than 30 senators.

Oye said that APGA would take Nigeria by storm, adding that Umeadi having served in the judiciary for 35 years was well equipped and was the candidate to beat in the presidential election.

“APGA is a realistic party; we do not build castles in the air. The emergence of Umeadi shows that APGA is united and would spring surprises by being elected president by Nigerians in 2023.

“We are here to do the needful, APGA does not believe in imposition, we gave everybody a level playing field to come and purchase the form.

“At the end of the whole process our brother former Chief Judge of Anambra, a life changer, a man of irrepressible character, a man who has shown capacity in many ways intellectually and otherwise is today being presented to all of us for affirmation as our candidate, ” he said.

Oye reiterated that there was no crisis in AGPA, pointing out that no faction existed because his leadership was the one INEC recognized.

In his acceptance speech, Umeadi said that he was stepping out with the triple banner of rule of law, separation of power and due process if elected.