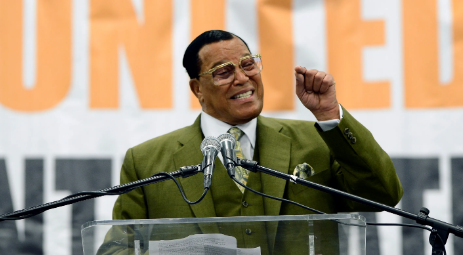 Who is Louis Farrakhan?

Louis Farrakhan (Louis Eugene Walcott) is an American political activist and a religious leader heading the Nation of Islam (NOI). Previously, he served the Boston and Harlem mosques as a minister and was appointed National Representative of NOI by Elijah Muhammad, former NOI leader. The Nation of Islam is described as a hate group by Southern Poverty Law Center (SPLC).

Louis started to rebuild the NOI as the Final call. He officially adopted the Nation of Islam name, LOUIS Farrakhan, in 1981. He revived the groups and established the NIO headquarters at Mosque Maryam. The NOI promotes “fundamentally anti-white theology” according to the SPLC which amounts to an “innate black superiority over whites”.

Some of Louis remarks are characterized as homophobic. In October 1995, Farrakhan led the Million Man March in Washington, D.C. He reduced some of his responsibilities in 2007 due to health issues. Louis led the 20th Anniversary of the Million Man March: Justice or Else in 2015. In 2019, Farrakhan was banned from Facebook along with other public figures considered to be extremists.

How Old is Louis Farrakhan?

Farrakhan was born on 11th May 1933. He is 88 years of age as of 2021. Louis shares his birthday with celebrities like Mort Sahl, Jonathan Jackson, John F. Kelly, Coby Bell, Eric Burdon, Jeffrey Donovan, Frances Fisher, among others.

Who Are Louis Farrakhan’s Parents?

Louis was born to Percival Clark and Sarah Mae Manning. His parents were Anglo-Caribbean island immigrants. Louis’ father had Jamaican ancestry and his mother was from Saint Kitts. After his parents divorced, Farrakhan went with his mother and Louis Walcott who became his stepfather.

Does Louis Farrakhan Have Siblings?

Farrakhan was the second born to his parents. He had an elder brother who is not mentioned to the media.

Louis previously known as Walcott schooled at Boston Latin School. Later he attended English High School and graduated. Walcott received a scholarship and schooled for three years at Winston-Salem Teachers College. He dropped out of school after his junior year in college to take care of his wife who had complications with her first pregnancy.

Farrakhan married his beloved wife Betsy Ross, currently known as Khadijah  Farrakhan in 1953 when he was still in college. The couple is in marriage for 68 years.

Does Louis Farrakhan have Children?

Louis is a happy father of 9 children. He is the father of Mustapha, Louis Jr., Donna Muhammad, Joshua, Abnar, Maria, Betsy-jean, Fatimah, and Khallada.

How Tall is Louis Farrakhan?

Adding to his well-built body, Farrakhan is 1.78 meters tall.

Farrakhan, Previously known as Walcott began his career as an artist in the 1950s. He toured the
northeastern and midwestern US earning a weekly salary of $500. Walcott released several hits between 1953 and 1954, following the success of the Calypso album by Harry Belafonte. Some of his tunes include The Charmer, Ugly Woman, Stone Cold Man” and calypso standards like “Zombie Jamboree”, Brown Skin Girl, Hol ‘Em Joe, and Mary Ann.

Walcott headlined a show in February 1955 in Chicago, Illinois, known as Calypso Follies. This is where he met with the NOI teachings through a friend from Boston known as Rodney Smith. Walcott and his beloved wife Betsy received an invitation to the Nation of Islam’s annual Saviours’ Day address by Elijah Muhammad. He by then thought that Malcolm X was the Nation of Islam leader.

Walcott met the requirements of becoming a registered Muslim believer in 1955. He fluently memorized and recited verbatim the 10 questions and answers of the NOI’s Student Enrollment. Walcott wrote a must-write Saviour’s letter to the NOI’s headquarters in Chicago. The letter must be copied verbatim, and have the NOI’s founder, Wallace Fard Muhammad identical handwriting.

Walcott received an approval letter from the Nation of Islam in July 1955 that acknowledged his official membership as a registered Muslim Laborer in the NOI. He received his “X.” The “X” was a placeholder, an indication of losing the original African family names. The NOI’s believed that European surnames were slave names, which were assigned by slavemasters to mark their ownership. The new NOI members used the “X” as they awaited their new Islamic names.

Louis Walcott became Louis X. His “X” was replaced with the “holy name” Farrakhan by Elijah Muhammad. Louis recorded two tunes as Louis X. The tunes criticized racism in A White Man’s Heaven Is a Black Man’s Hell. The album was later issued on A Moslem Sings label in Boston in 1960.

Elijah Muhammad, the NOI leader by then stated that all the member artists had to choose between the NOI and music, the summer after Farrakhan’s conversion. Louis X stopped his musical career after his final performance at Nevele, a Jewish resort in the Catskills.

Farrakhan was appointed to the two prominent positions that Malcolm held before being dismissed from the NOI after Malcolm X’s assassination by Elijah. Louis was made the national spokesman of the NOI. He was appointed the minister of the influential Harlem Mosque. He served there until 1975.

After the death of Elijah Muhammad, his seventh son Warith Deen Mohammed was declared the new NOI leader in February 1975 at the annual Saviours’ Day Convention. Warith made substantial changes in the late 1970s. These include taking most NOI members to a closer relationship with orthodox Islam, and renaming the group “World Community of Islam in the West”.

He later renamed the group the American Society of Muslims. w. Deen Mohammed rejected the deification of the NOI’s founder Wallace D. Fard as Allah in person, the Mahdi of the Holy Qur’an, and the messiah of the Bible. He welcomed once considered devils and enemies of the NOI, white worshipers as equal brothers, sisters, and friends.

He changed his title and position from Chief Minister Wallace Muhammad to Imam Warith Huddin Mohammad and later to Imam Warith Al-Deen Mohammed. Louis joined Warith’s movement and became a Sunni Imam under him for three ad a half years starting from 1975 to 1978. He was given the name Abdul-Haleem.

The Rebuild of the NOI

In 1978 Farrakhan left the movement. Together with his supporters, Louis began to rebuild the Nation of Islam in 1978 upon Wallace Fard Muhammad, and Elijah Muhammad’s foundations. They made the decision without any public notification.

Farrakhan’s group founded The Final Call, a weekly newspaper in 1979. The newspaper’s intentions were similar to the original Muhammad Speaks newspaper. Louis had a weekly column in The Final Call. Farrakhan and his followers held their first Saviours’ Day convention in Chicago, Illinois in 1981. They took back the Nation of Islam name.

Minister Farrakhan described a vision he had on 17th September 1985 in Tepoztlán, Mexico on 24th October 1989. He said he heard the voice of the leader of the Nation of Islam, Elijah Muhammad in the vision.

Qubilah accepted a plea agreement on 1st May 1995 under which she maintained her innocence but accepted responsibility for her actions. Farrakhan convened a broad coalition on 16th October 1995 for what he claimed was one million men in Washington, D.C., for the Million Man March.

Together with other speakers, they called for black men to renew their family and community commitments. Farrakhan termed himself as a God-sent prophet to show America its evil. Among the distinguished African Americans include Maya Angelou; Rosa Parks; Martin Luther King III, Cornel West, Jesse Jackson, and Benjamin Chavis.

Farrakhan, among other African Americans such as Malik Zulu Shabazz, Al Sharpton, and Addis Daniel
marked the 10th anniversary of the Million Man March in 2005. They held a second gathering, the Millions More Movement, from 14th to 17th October in Washington D.C.

Louis Farrakhan as a Racist

Farrakhan is classified as a racist by The Anti-Defamation League. The NOI group is considered a hate group and a black nationalist organization by the Southern Poverty Law Center. This is because Farrakhan has preached the organization’s theology which claims black superiority over whites.

The Whites were created 6,600 years ago as a “race of devils” by an evil scientist named Yakub according to the NOI. This is a story by Wallace D. Fard, the NOI. Louis has made comments that have been deemed antisemitic by the Anti-Defamation League and Southern Poverty Law Center. Farrakhan supported Barack Obama during his presidential campaign.

On 11th September 2006, Farrakhan announced his illness in a letter to his staff, NOI members ad supporters. It was published in The Final Call. Louis was admitted to a hospital for a period of 5 weeks. He had major abdominal surgery and was discharged from the hospital on 28th January 2007.

Farrakhan suffered a heart attack in October 2013 which stopped him from public appearance until December 2013.

Farrakhan has accrued an estimated net worth of about $5 million from his long-term religious career.