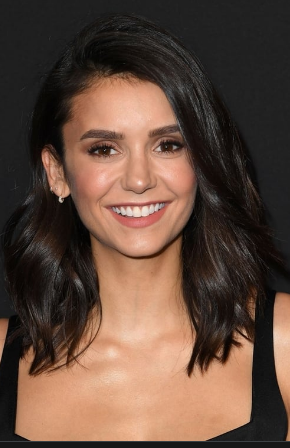 Who is Nina Dobrev?

Nikolina Kamenova Dobreva, professionally known as Nina Dobrev is a well-recognized Canadian actress. Her initial acting role was as Mia Jones in the CTV drama series Degrassi: The Next Generation. Nina later became popular for playing Elena Gilbert and Katherine Pierce on The CW’s supernatural drama series The Vampire Diaries.

How old is Nina Dobrev?

Nilolina Kamenova Dobreva aged 32 as of 2021, was born on January 9, 1989, in Sofia, Bulgaria. She shares her birthday with famous people including Brent Rivera, Blake Gray, Richard Nixon, Bob Denver, Jimmy Page, Dave Matthews, Catherine, Duchess of Cambridge, among others.

Who are Nina Dobrev’s parents?

Nikolina Kamenova Dobreva was born in Sofia, People’s Republic of Bulgaria (now Bulgaria) to Michaela Constantine Dobreva and Kamen Dobrev. Her parents immigrated to Canada when Nina was aged two and settled in Toronto, Ontario where she was brought up. Her father is a computer specialist and her mother is an artist.

Does Nina Dobrev have siblings?

Dobrev was born to her parents as the second-born child in a family of two children. She has one older sibling, brother Alexander Dobrev.

Nina joined and studied at Vradenburg Junior Public School and later J. B. Tyrrell Sr. Public School, where she began ballet and jazz classes and competed in rhythmic gymnastics. After graduating she attended acting classes at Armstrong Acting Studios in Toronto. She then attended the arts program at Wexford Collegiate School for the Arts in Scarborough till her graduating year. Nina joined post-secondary studies at Ryerson University in Toronto, specifying in Sociology, however, her pursuit of an acting profession hindered her graduation.

Dobrev, at an early age, had interests in music, and sports and attended ballet and jazz classes, and also competed in rhythmic gymnastics. She is fluent in English and Bulgarian and conversant in French and is a dual citizen of Canada and Bulgaria. Dobrev takes part in modeling and enjoys playing soccer and volleyball, swimming, rock climbing, wakeboarding, snowboarding, and horseback riding.

Nina is also a supporter of multiple charitable causes which include Puma’s 2011 non-profit Project Pink, which supports many breast cancer charities. Also the Hunger Bites, an organization that is aimed at reducing hunger in 27 districts across Pennsylvania. Nina is additionally known for her long-term involvement with the WE movement, a Canadian-based charity empowering youth to be agents of change.

Nina also participated in a Me to We volunteer trip to Kenya to assist build a school. In 2011 she hosted the We Day event in Toronto and made an appearance on stage at WE Day California 2019. She has been involved in other social and charity issues which include communities in schools, school supplies, Elton John AIDS Foundation, and ”Rape Foundation”, which offers comprehensive care to rape victims and sexually abused children.

Dobrev previously dated American actor Ian Somerhalder for three years but ended their relationship later. She then was romantically linked to Dancing With The Stars dancer Derek Hough after a few months. The two met through Derek’s sister and Nina’s friend Julianne Hough in 2013, however, they split up not long after. From 2013 she has been in several short relationships with other men including Liam Hemsworth in 2014 after his breakup with Miley Cyrus, James Marsden in 2014, Orlando Bloom in 2014.

Nina has also dated Austin Stowell for seven months in 2015. She later began dating Glen Powell in 2017 and the two dated for almost one year but broke up and went separate ways. In 2019 she started dating screenwriter Grant Mellow but they split in November 2019. Nina is presently linked to Shaun White as they began dating in March 2020. They have been spotted together and Nina confirmed they were together, after posting a photo of her cutting Shaun’s hair in May.

Nina presently has no children of her own as she has not been in any serious relationship and is still single. Although she is CU linked to Shaun White they do not have a child.

Previously, the Canadian actress lived in Atlanta, Canada, but later in 2009, she moved to Los Angeles, United States.

Nina’s initial main acting role was as Mia on the teen drama TV series Degrassi: The Next Generation. She played the role for three seasons beginning in 2006. Dobrev appeared in various feature movies in the mid-2000s, which include Fugitive Pieces and Away from Her. She additionally headlined a number of television movies, such as Sci-Fi Channel’s Never Cry Werewolf, MTV’s The American Mall, and two Lifetime original films. Nina appeared in the track video of ”You Got That Light” performed by Wade Allain-Marcus and David Baum in 2017.

Later in August 2014, she starred in the 20th Century Fox comedy Let’s Be Cops. In the 2015 horror comedy movie The Final Girls, she played the role of Vicki Summers. She was then cast in the movie Arrivals in September 2015 playing as a flight attendant Izzy. The movie was later renamed Departures and was planned to go into production in April 2017. Dobrev was cast then cast in the romantic comedy Crash Pad the same year, and it began filming in Vancouver in late 2015.

She was then cast in March 2018 in the role of Clem in the comedy Fam, a CBS TV pilot that was changed to series in May 2018. The sitcom later premiered on January 10, 2019, however, it was canceled after one season on May 10, 2019. She also starred as Chloe in the Roger Avary thriller Lucky Day, launched in 2019. The same year she joined the cast of the movie Run This Town, which was launched in March 2020. It was later announced in July 2020, that Nina would star in and serve as executive producer for a TV adaptation of the Woman 99 book series.

Canadian actress and model, Debrov has been active in her acting profession from 2006 to date. She has appeared in many films and earned a lot of wealth, as she currently has a net worth of approximately $11 million as of 2021.