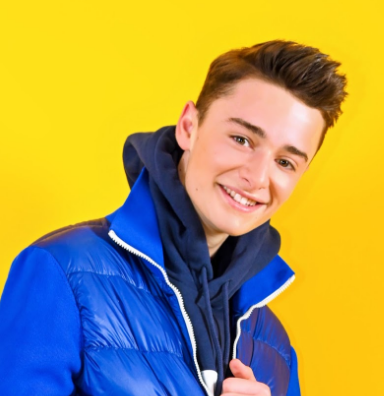 Who is Noah Schnapp?

Noah Cameron Schnapp is an eminent American actor. He gained prominence for playing Will Byers in the Netflix science fiction horror streaming television series Stranger Things. Because of his role in the series, he won the Screen Actors Guild Award for Outstanding Performance by an Ensemble in a Drama Series with fellow cast members.

His other notable film roles include Roger Donovan in Steven Spielberg’s historical drama Bridge of Spies (2015) and the voice of Charlie Brown in the animated The Peanuts Movie (2015).

How Old Is Noah Schnapp?

He is 17 years old as of July 2022, having been born on October 3, 2004, in New York City, U.S. Noah shares his birthdate with celebrities such as; JillianTubeHD, A$AP Rocky, Gwen Stefani, Bang Chan, and many more.

Who are Noah Schnapp’s Parents?

He was born to Mitchell Schnapp (Father) and Karine Schnapp (Mother).

Does Noah Schnapp have Siblings?

He has a twin sister by the name of Chloe Schnapp (born on October 3, 2004). His sister is four minutes younger than him.

He received his education at Scarsdale High School.

When he was about five years old, his desire to start acting started after watching the Broadway production of Annie. For this reason, he performed acting roles in school and community plays. His acting career when he was 8, suggested he attempt a professional career. And thus his parents enrolled him in an acting program. with coach Alyson Isbrabdtsen. His acting debut was in the Academy Award-winning 2015 film Bridge of Spies directed by Steven Spielberg. In the film, he played Roger, the son of character James B. Donovan.

Moreover, Noah voiced the lead character, Charlie Brown in the animated movie The Peanuts Movie. In July 2016, his breakthrough came when he began starring in the Netflix science fiction-horror television series Stranger Things as Will Byers. He was then promoted to series regular for the second season of the series which premiered on October 27, 2017. Moreover, he starred in independent films like; Abe (2019) and Waiting for Anya (2020). Next, he appeared in the 2020 Halloween comedy film Hubie Halloween. In April 2022, he joined the cast of The Tutor.

A Career in Other Ventures

Besides acting, he launched a YouTube channel under his own name in 2019. The account being active for a year and a half, he primarily created vlogs and lifestyle videos. As of June 2022, his channel has gained 4.2 million subscribers and has gained 110 million views. He then launched To Be Honest (TBH) in November 2021, a sustainability-focused snacking company.

Noah Schnapp’s Salary and Net Worth