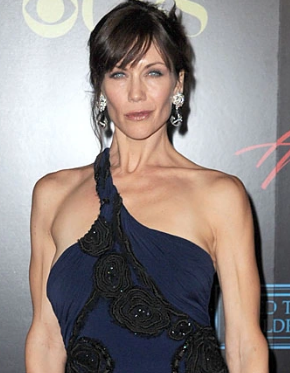 Stacy Haiduk is an American prominent actress. Her most notable roles include; Lana Lang on Superboy, Katherine Hitchcock on seaQuest DSV, Hannah Nichols on All My Children, Patty Williams and Emily Peterson on The Young and the Restless, and Kristen DiMera and Susan Banks on Days of Our Lives.

She is 54 years old as of August 2022, having been born on April 24, 1968, in Grand Rapids, Michigan, U.S. Stacy shares her birthdate with celebrities such as; Joe Keery, Aya Tanjali, Jordan Fisher, Caspar Lee, Kelly Clarkson, and many more.

She received her education at Northview High School.

She and her husband Bradford have one kid, a daughter by the name of Sophia Tatum.

She first achieved national fame in 1988, when she was cast in the role of Lana Lang in the live-action Superboy TV series. When the series ended, she appeared in the direct to video Luther the Greek for Troma Entertainment. After Superboy, she went on to portray Rhea McPherson, an aspiring FBI agent in the short-lived Spelling series, The Round Table. Her next significant role was on seaQuest DSV, in which she played Lt. Cmdr. Katherine Hitchcock, the chief engineer, and third in command of the high-tech submarine.

In 1994, she appeared in the TV movie, A Perfect Stranger (based on the novel of the same name by Danielle Steel). She went on to play in the short-lived series Kindred: The Embraced as a female vampire. After this stint, much of her acting consists of smaller films such as Gabriela where she appeared alongside Jaime Gomez and Zach Galligan. Moreover, she has had guest star roles on television shows such as Charmed, The X-Files, CSI: Miami, CSI: NY, Cold Case, Due South, Crossing Jordan, NCIS, Heroes, Prison Break, and Burn Notice.

Next, she appeared in the new supplemental material for the Superbot: The Complete First Season DVD release in 2006. From January 2007 through January 2008, she appeared regularly on the ABC soap opera All My Children as Hannah Nichols. She then appeared on the CBS soap opera The Young and the Restless as Patty Williams from February 2009 to August 2010, she also played Emily Peterson in the series. In July 2010, she was cast to play a prison warden on Days of Our Lives.

After three episodes, she was subsequently dismissed and recast with former Santa Barbara actress Gina Gallego, due to a scheduling conflict with The Chicago Code. Her next appearance as Warden Smith aired in September 2010. It was announced in 2018, that Stacy had again been cast on Days of Our Lives, this time in the roles of Kristen DiMera and lookalike Susan Banks. She then returned to the show in early 2019 signing a contract this time.

Stacy Haiduk’s Salary and Net Worth