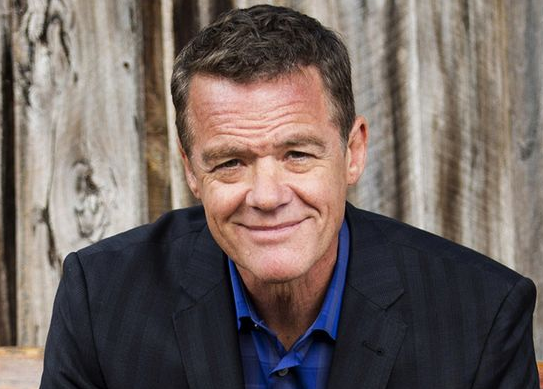 Who is Stefan Dennis?

Stefan Dennis is an Australian eminent actor and singer best known for playing the role of cold-hearted and ruthless businessman Paul Robinson in the soap opera Neighbours from its first episode in March 1985 to the present day. In 1992, he departed from Neighbours before returning in 1993 for a short stint. He then made a return 11 years later (at the end of 2004) and played Paul Robinson up until the show’s ending n 2022.

During his time away from Neighbours, he was a cast member of the Scottish soap opera River City produced and set in Glasgow, Scotland. He is also best known for his 1989 hit single “Don’t It Make You Feel Good” which reached No. 16 on the Irish and UK Singles Chart.

How Old Is Stefan Dennis?

Who are Stefan Dennis’s Parents?

According to news on the internet, it shows that his family moved to Queensland. But information regarding his parents’ names is not mentioned on the internet.

Does Stefan Dennis have Siblings?

He has two siblings by the name Chris Dennis and John Dennis, the latter was killed by a drunk driver at the age of 12.

He started out in guest roles on programs such as Cop Shop, Skyways, Carson’s Law, Young Ramsay, Prisoner, Home, The Henderson Kids, The Sullivans, The Young Doctors and Sons and Daughters, and many others. And had a number of credits to his name. His major role came in The Henderson Kids, a co-lead in an ABC children’s show called Infinity Limited. And he co-starred in The Flying Doctors mini-series. He went on to audition for the roles of Shane Ramsay and Des Clarke in 1984, in a new soap opera, Neighbours where he was later cast as Paul Robinson instead. His role in Neighbours brought him opportunities such as appearing at the Royal Variety Performance alongside fellow cast members.

In 1992 after finishing Neighbours, he moved to the UK and worked on a variety of TV shows and theatre productions. And went on to appear in many pantomimes, plays, and musicals. In 1994, he played Mickey in Blood Brothers, touring in New Zealand and Australia before returning to the UK to appear in the show in both the West End and in a national tour of the UK. Moreover, he appeared in many television shows, including Dream Team, River City, The Bill, and Casualty. From time to time, he returned to Australia for guest roles in shows such as Blue Heelers, Good Guys Bad Guys, and Stingers. For many years, he has worked as a voiceover artist both in Australia and the UK.

In 1995, he was part of the team that set a new world record for 24-hour endurance outdoor karting. The team – Stefan Dennis, David Brabham, Russ Malkin, and Steve Malkin on 24 and 25 February 1995. – Set the record of 1,664.7 km (1,034.397 mi) on a 1.3 km (0.808 mi) track at Brooklands, Weybridge, Surrey, UK. While in the UK, he became a partner in Lex Film Entertainment and was an associate producer on the film, The Truth About Love. At the end of 2004, he returned to Neighbours and was a regular character once again as of 2005. Thus signed a three-year contract that ran to the end of 2008, which he has now extended. Currently, he is the only cast member who appears in the first episode, although he is not the longest serving due to his long break.

Because of his role in Neighbours, he has said that people struggle to tell the difference between himself and the character and “shy away” from him because “they think I’m going to bark at them”. Although in the series he portrays as having a prosthetic leg, he has two good legs of his own. In 2009, he was stalked by two fans while presenting the Best Villain award at the British Soap Awards. In March 2015, he hosted a documentary special celebrating Neighbours’ 30th anniversary. Titled Neighbours 30th: The Stars Reunite, which aired in Australia and the UK. He went on to appear in the recurring role of Michael Armstrong QC in the sixth series of Wentworth in 2018.

He started a side-line music career in 1989 and released the single “Don’t It Make You Feel Good” which reached No. 16 on the UK Singles Chart, in May of the Year. He then released a second single, “This Love Affair”, which reached No. 67 in the UK in October 1989. Furthermore, he is a talented pipe organist. (cite Australian Organist Association 1990 march).

Stefan Dennis Salary and Net Worth

His salary is not mentioned on the internet but has a net worth of $5 million.