Boko Haram, Niger Delta Militants, Tony Oyatedor, We Can Talk To Boko Haram and They'll Listen To Us - Jonathan's Kinsman 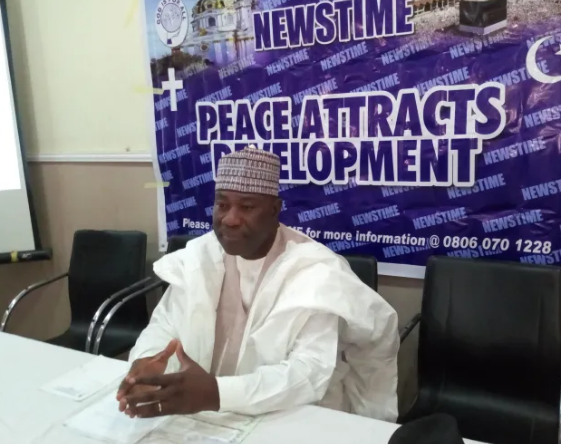 We Can Talk To Boko Haram and They’ll Listen To Us, says Jonathan’s Kinsman.

The article was first published in February 2012 in People’s Daily Magazine.

United States-based Nigerian journalist and motivational speaker, Mr. Tony Oyatedor is also the President/Chief Executive Officer (CEO) of Newstime International Company. In this interview with Adeola Tukuru, he opens up on the actual problems in the country saying his group can talk to the dreaded Boko Haram sect to sheathe their sword.

You have been advocating to be given a chance to bring peace to Nigeria, what is the status of that agitation?

Two years ago, I recalled a stated in an interview with this paper that we have twin problems in Nigeria and I told you that God has bestowed it on us to bring solutions but nobody is listening to us.

Our first problem was the militancy issue and the second is the religious crisis. We have spoken publicly and privately; the Federal Government has refused to listen. I have told the nation severally that prevention is better than cure; if we prevent crisis today, then we prevent having to cure tomorrow; but what you see is that we have always taken up cure rather than prevention and that is our problem.

We have a situation where we have been investing in security for the past 50 years yet there is no result and they are putting in more and more funds. We have called on government at all levels to join forces with us to embark on a massive campaign for peace. Without peace, there will never be any security in Nigeria. What I am speaking about is the mind of God. There is no religion in this country that does not back what I am saying.

It appears that efforts to bring about peace had always failed so how will you go about it this time?

The sure way to achieve peace is to turn to God. God’s prescriptions are contained in the three Holy Books.; The Bible, Quran, and the Torah, these books teach us to love our neighbors as ourselves. Presently in this country, there is wickedness everywhere. Look around your neighborhood everywhere, people no longer have compassion; nobody cares about others anymore. So it will only take men of God to teach the love and unless we do these teachings and go all over Nigeria, we will not achieve peace.

People don’t have the knowledge of the fear of God; that is why they’re doing what they are doing. For example, during the militancy in the Niger Delta, we opened up and allowed compassion and taught ourselves how to love one another and the militancy ended. The same thing can happen in the North and that is the only way to solve the Boko Haram problem there. The best way to propagate Islam is to repel evil with good and that is exactly what the Quran tells you; to repel evil with good. Each and every one of us is created by God and he does not allow people to take the life of fellow human beings. So we should teach people these and they must come from genuine men and women of God like us who are willing to go to the rural areas, to go to the intellect and speak to them. We must all go back to God and fear God and take care of one another and then there will be peace and security.

We have Christian and Muslim leaders who have been preaching peace and have been meeting the President concerning the security situation of the country. Are you saying that they are not genuine or that their effort will yield nothing?

I have said it before and I will still say it again that there are “men of God” and there are “men off God” and they know themselves. So we are not in the blame game or the blame business and we are not pointing fingers. We know that God Almighty knows all of them. It will take somebody that has a love for God, a passion for God and humanity, and love for Nigeria and not the love of money to achieve peace here. We have a situation in the country where these “men off God” are just there to seek governmental positions and not for the love of the people. We need to travel around the nation to ensure them about the knowledge we are willing to teach, then there will be peace. This country is a blessed nation created by God. He gave oil, gas, and a lot of other resources for the benefit of the people, not for one man or one locality or state. They are for the use of everybody. It is when people have this understanding that everybody will say they have a stake in the country and people would build rather than destroy it.

So, how can we get people to listen?

You will recall that in the Bible God chose Moses as his messenger and he led like a good shepherd. So unless the message is coming from the chosen one, it would be like empty words coming. The message must align with the messanger then the people would listen. People don’t listen because many of those bearing the message is not genuine.

Can you elaborate on this?

Genuine people do more prevention than cure. You have a situation today, where nobody cares for people but immediately there is a crisis like a bomb blast, and you see government people running around. That is when CBN will send N100 million to the poor people. Government people wait until people die before taking action.

The other time, it was when hundreds of people were slaughtered in the North that the government sent N16million and gave N13million for burial, N2million for the repair of churches and other properties destroyed. If N1m was given to people to propagate oneness and love of one another, we would have avoided the violence. So we are always doing medicine after death. That is why people are not listening; there is hunger in society and it breeds anger and it is only the mouth that will cure this hunger and bring down the anger not guns, not CCTV, not a state of emergency.

Some people are saying that Christians and southerners should move from the north and others are saying that northerners should leave the south. That is uncalled for. That Kaduna State governor Patrick Ibrahim Yakowa is a Christian; the former head of state, General Yakubu Gowon is a Christian; the former military President, General Ibrahim Babangida was married to a lady from Delta state Maryam Babangida; where will her children go? The former Vice President, Atiku Abubakar is married to a Yoruba woman. I will implore Nigerians that it is better to be one than to be divided. Anyone who truly loves Nigeria should pray for this country to be together as it is. The entire Nigeria Landmark is not up to California. Since the late President Yar’adua brought amnesty to the Niger Delta, our prayer is that the present President Goodluck Ebele Jonathan will bring peace to the North.

But we are dealing with faceless people; talking about the Boko Haram sect. How do we deal with such a situation?

You have a situation whereby a COmmander-in-Chief said that there are Boko Haram in the Presidency, National Assembly, the police, and all that and you are saying that they are faceless. The last time I checked, there was no faceless person working in the National Assembly or spirit working in the Presidency. So it is incumbent on the media to ask the President to point them out since he knows them. Initially, when the Niger Delta Militants were agitating, they would wear masks, eventually, we reached out to them and we resolved and brought them to the drawing table and we negotiated and everything was resolved. So if Yar’adua could bring peace to the Niger Delta, it is incumbent on a Niger Deltan to bring peace to the North and the entire country. So when you say faceless, I don’t agree. They have a spokesperson who gives out their intention to the press. Kabiru Sokoto is not a spirit.

The only way we can solve this problem is through peace. Newstime has the solution which is to preach peace. It is not enough to spend close to a trillion naira on security. That is not going to take us anywhere. Invent the initiative Newstime is offering and see where this country will be; try just a little bit and see. We know what we have accomplished on our own to bring peace to a few people in Pleatuea and a few other places. We can talk to the Boko Haram people and they will listen to us because we will bring the genuine message of peace. So let them spend these millions and trillions to save lives and properties and not for burials.