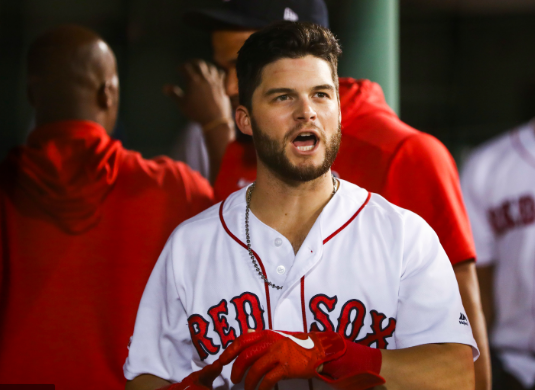 Andrew Sebastian Benintendi is a famous American professional baseball outfielder for the New York Yankees of Major League Baseball (MLB). Previously he played for the Boston Red Sox from 2016 to 2020 and the Kansas City Royals from 2021 to 2022.

Benintendi played college baseball at the University of Arkansas for the Arkansas Razorbacks. The Red Sox then picked him in the first round of the 2015 MLB draft, and in 2016, he made his MLB debut with the team. Benintendi was part of the 2018 World Series champions. The Red Sox then traded him to the Royals following the 2020 season. Benintendi received a Gold Glove Award in 2021 and was an All-Star in 2022. The Yankees then acquired him from the Royals in 2022.

Andrew attended Madeira High School, in Madeira, Ohio. He played for the school’s baseball team, batting .564 with 12 home runs, 57 RBIs, and 38 stolen bases on the Mustangs baseball team in his senior year. He also was the ABCA/Rawlings National High School Player of the Year and Ohio Gatorade Baseball Player of the Year. Benintendi completed his high school career with an Ohio-record 199 career runs scored. He additionally played high school basketball, receiving 2011-12 Cincinnati Enquirer Division III Co-Player of the Year honors. He also set school records in career points (1,753) and season points (638), career three-pointers (180), and points per game in a season (25.5).

The Cincinnati Reds picked him in the 31st round of the 2013 Major League Baseball (MLB) draft, but he did not sign with them. Benintendi enrolled at the University of Arkansas to play college baseball for the Arkansas Razorbacks baseball team. He played in 61 games, with 60 starts, and hit .276/.368/.333 with one home run and 27 RBIs, as a true freshman. In 2015, he led the Southeastern Conference (SEC) in batting average (.380), home runs (19), on-base percentage (.489), slugging percentage (.715), and walks (47) in his junior year. Benintendi was named the SEC Player of the Year, and also received the Baseball America College Player of the Year Award, the Dick Howser Trophy, and the Golden Spikes Award.

The Boston Red Sox picked Benintendi with the seventh overall selection in the 2015 MLB draft. He then signed with them, earning a $3.6 million signing bonus. Benintendi made his professional debut with the Lowell Spinners of the Class A-Short Season New York-Penn League. He completed the 2015 season playing 19 games for the Class A Greenville Drive going 26/74 (.351) and posting an OPS of 1.011. Benintendi started the 2016 season with the Salem Red Sox of the Class A-Advanced Carolina League and earned a promotion to the Portland Sea Dogs of the Class AA Eastern League on May 15.

Andrew Sebastian Benintendi was born to his parents, Jill Benintendi and Chris Benintendi, in Cincinnati, Ohio. His paternal grandparents immigrated from Sicily, Italy to the United States, and settled on Lama Ct in Gravesend, Brooklyn, where they lived.

Benintendi was born to his parents into a family of two children. He has one sibling, a younger sister, Olivia Benintendi.

Benintendi attended Madeira High School, in Madeira, Ohio, where he played baseball and also basketball. He then joined the University of Arkansas to play college baseball for the Arkansas Razorbacks baseball team.

Benintendi grew up as a Cincinnati Reds fan. He also supported the St. Louis Blues as opposed to the Boston Bruins during the 2019 Stanley Cup Finals.

Benintendi is currently not married but is in a relationship. He is dating his beautiful and stunning girlfriend Rebecca Anne Schamel. They have been dating for an undisclosed time and Andrew resides in St. Louis, Missouri, during the offseason.

Benintendi and his beautiful and supportive girlfriend do not have any children of their own to date.

He then hit a home run in his first postseason at-bat, off Indians pitcher Trevor Bauer in Game 1 of the 2016 ALDS over the Cleveland Indians on October 6. With the feat, he became the youngest Red Sox player to hit a home run in a postseason game. However, the Indians’ won the game by a score of 5-4 and dominated the series in three games. Andrew completed the 2016 season with a .295 batting average, 31 hits, 14 RBIs, two home runs, and one stolen base in 34 games played.

Benintendi began the 2017 season as part of the Red Sox’s Opening Day roster, batting second as Boston beat the Pittsburgh Pirates by a score of 5-3. He went 5-for-5 with 6 RBIs and 2 home runs, a double in the 11-4 win against the Texas Rangers on July 4. Benintendi completed second in the American League Rookie of the Year voting, despite earning no first-place votes because Aaron Judge won unanimously. In total, during the 2017 Red Sox regular season, he batted .271 with 20 home runs, 90 RBIs, and 20 stolen bases in 151 games played. In the ALDS, he batted .250 (4-for-16) with a home run and 2 RBIs in four games against the final World Series champions, the Houston Astros.

Within the first half of the season, Benintendi was the team’s regular left fielder, usually batting second, behind Mookie Betts. He was then named as a candidate in the American League’s All-Star Final Vote, on July 8, for a spot in the 2018 MLB All-Star Game. At that time of the season, he had a slash line of .293/.379/.515 with 14 home runs and 55RBIs. In the Final vote, fans picked Jean Segura of the Seattle Mariners. Benintendi appeared in 148 games hitting .290 with 41 doubles, 103 runs scored, 16 home runs, and 87 RBIs, and stealing 21 bases for the season.

In the 2018 MLB playoffs, he recorded the final outs to seal wins for the Red Sox in Games 4 and 5 of the 2018 American League Championship Series, the first of the two a diving effort to prevent a bases-loaded hit in a two-run game. The Red Sox received the World Series against the Los Angeles Dodgers, earning Andrew his first championship title. In the World Series, he had 4 hits in Game 1 and hit .333 in the Fall Classic.

Andrew started the 2019 season as Boston’s regular left fielder. Manager Alex Cora first made him the team’s leadoff hitter, until the beginning of June when Cora moved, Andrew to second in the order, with Mookie Betts batting first, as was the team’s usual order in 2018. Benintendi was ejected for the first time in his MLB career on June 11, for a comment he made about the home plate umpire (Angel Hernandez) that was heard by the first base umpire (Vic Carapazza). For the season, he appeared in 138 games, batting .2666 with 40 doubles, 13 home runs, and 68 RBIs.

The Red Sox revealed signing Benintendi to a two-year, $10 million contract on February 8, 2020. He then recorded the 500th hit of his major league career, a ground-rule double off of New York Mets pitcher Jeurys Familia on July 29. Andrew was placed on the 10-day injured list with a right rib cage strain on August 12. His 2020 campaign came to an end on September 8, following being transferred to the 45-day injury list. He was 4-for-39 at the plate (.103) with one RBI with the 2020 Red Sox.

The Red Sox traded him and cash considerations to the Kansas City Royals on February 10, 2021. This was part of a three-team trade in which the Red Sox acquired Franchy Cordero, Josh Wieckowski, and three players to be named later, while the New York Mets received Khalil Lee. The three players were later named as minor league prospects: outfielder Freddy Valdez from the Mets, and pitchers Grant Gambrell and Luis De La Rosa from the Royals.

Andrew batted .276/.324/.442 with 17 home runs and 73 RBIs in 134 games in his first year with the Royals. Benintendi led all left fielders with 1,116 innings played and a .987 fielding percentage and received his first Gold Glove Award. He was awarded a salary of $8.5 million for the 2022 season in salary arbitration. Benintendi started the season batting .317 en route to being named the Royals’ lone representative to the 2022 MLB All-Star Game.

The Royals then traded him to the New York Yankees in exchange for minor league prospects Chandler Champlain, T. J. Sikkema, and Beck Way on July 27, 2022. He went 0-4 with a strikeout in his first game with New York.

Andrew Benintendi Net Worth
American professional baseball outfielder, Benintendi currently plays for the New York Yankees of the MLB. He previously played for the Kansas City Royals and the Boston Red Sox and he earns a salary of $8.5 million. Benintendi has gathered an accumulative net worth of approximately $3 million in his career as of 2022.