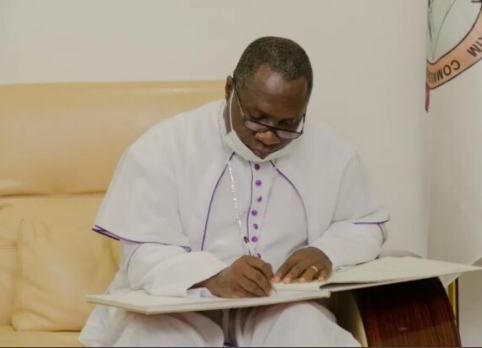 Who is Archbishop Daniel Okoh

Daniel Okoh was born November 12, 1963, somewhere in Kano State Nigeria to Christian parents. He is a native of Ndoni in Ogba/Egbema/Ndoni Local Government Area of Rivers State, Nigeria.

As the General Superintendent of Christ Holy Church International – an African Independent Church – he leads his denomination in ecumenical relations with other denominations in the body of Christ and engages with people of other religions in dialogue for peaceful co-existence and sustainable development.

For more than 20 years, Most Rev. Daniel Okoh has been actively involved in ecumenical relations and interfaith dialogue in and outside Nigeria through the following positions:

Between 2000 and 2003 he was the only African representative on the Steering Committee of the International Forum on Multicultural Ministry which was initiated and sponsored by the Mission and Evangelism Team of the World Council of Churches.

In the area of Politics and Governance, Archbishop Daniel Okoh was one of the six delegates that represented the Christian Association of Nigeria (CAN) in the National Political Reform Conference of 2005 organized by the Federal Government of Nigeria.

From 2009 – 2011 Most Rev. Daniel Okoh served on the board of the National Orientation Agency (NOA) as an Institutional representative of the Christian Association of Nigeria.

Over the years, Daniel Okoh, a de-tribalized Nigerian, has built friendships across religious and ethnic lines around the globe.

Daniel Okoh and CAN

Daniel Okoh was elected President of the Christian Association of Nigeria (CAN) in July 2022.

CAN is the apex body of all Christians in the country, comprising five blocs. He became the first from the OAIC bloc of the Christian Association of Nigeria to hold the position.

He is married to Ngozi. They are blessed with four children.