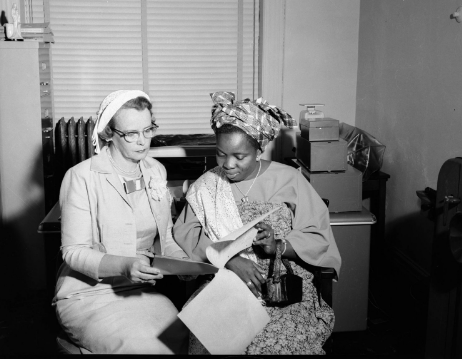 Who is Chief Elizabeth Adekogbe?

Lived from (1919 – 1968), Elizabeth Adekogbe was a Nigerian nationalist, politician, women’s rights leader, and traditional aristocrat. She was the leader of the Ibadan-based Women’s Movement of Nigeria. In 1954, the movement changed its name to the Nigerian Council of Women, which in 1959 merged with the Women’s Improvement League to form the National Council of Women Societies, a dominant pressure group and a leading women’s coalition in Nigeria.

She studied at St Agnes Catholic Training School and Yaba College of Technology. She soon joined the civil service and rose to become an Assistant Inspector of Prices during World War II.[1]

The Women’s Movement was formed in Ibadan in 1952. The group’s objectives were universal suffrage, admission of women to Native Authority councils, the nomination of members to the Western House of Assembly, enrollment of more girls in secondary schools, a reduction in the bride price, and controls over Syrian and Lebanese trading monopolies. The organization was sometimes aligned with the Action Group.[4] However, few or zero politicians and parties put forth women candidates in federal elections during the period, though women played a major role in electioneering at the time. The women groups were more likely used for gaining votes.

In 1953, a women’s conference was convened in Abeokuta. The conference contained all the major women’s organizations in the country. A leader of the assembly, Funmilayo Ransome-Kuti, who was favorably disposed towards the National Council of Nigeria and the Cameroons (NCNC), named the congregation: the Federation of Nigerian Women’s Society. However, there was a battle of wills among the two prominent women at the assembly: Adekogbe and Kuti. Adekogbe lost and left the assembly. Later, she supported an alliance with the women’s league of the Action Group.

Elizabeth Adekogbe and the Women’s Movement of Nigeria.

Unknown to many, women played instrumental roles in Nigeria’s journey to independence. One such woman was Elizabeth Adekogbe, a nationalist, journalist, teacher, and women’s rights activist, who was the founder and leader of the Women’s Movement of Nigeria, an organization that championed the rights of women in political, social, and economic spaces. Adekogbe worked for hand in hand with Funmilayo Ransome-Kuti, Wuraola Esan, Tanimowo Ogunlesi, and Margaret Ekpo. These pioneering women were staunch women’s rights activists and contributed to Nigeria’s independence struggle.

Adekogbe was born in 1919 to the Ajaloorun, the king of Ijebu-Ife, in southwestern Nigeria. She was educated at Saint Agnes Catholic Training College, Lagos, and Yaba College of Technology, Lagos, where she trained to become a teacher. In 1946, she moved to Ibadan with her husband, Alademerin Akija Adekogbe, who worked for the Ibadan Corporative Progressive Market Union as a cocoa seller while she was the headmistress at Saint James Primary School, Ibadan.

In December 1952, she and a group of 14 women, founded the Women’s Movement of Nigeria (WM) in Ibadan, of which she was its leader. The aim of the organization was to remove all political, economic, and social discriminatory barriers against women; to strengthen women’s education and improve their living conditions; to promote the welfare of women in the community through cooperation between different women’s societies; and to train women to assume their responsibilities as citizens (i.e., to exercise the right to vote and the right to be represented) at both regional and national levels.

In July 1953 in Abeokuta, Adekogbe in collaboration with Ransome-Kuti and Ekpo founded the Federation of Nigerian Women’s Societies (FNWS), a sector of the WM. The main goal of FNWS was to prepare women to take up political offices. Adekogbe would later leave the FNWS over some disputes about her role in the FNWS.

In 1954, she became the organizer of the women’s wing of the Western Region’s Action Group party. She also changed the name of the WM to the Nigerian Council of Women (NCW). Adekogbe was also a member of the International Council of Women (ICW), an organization founded in the United States to mobilize women from different countries. In March 1957, she alongside Esan, the first woman member of the Nigerian Senate, and Ogunlesi, another nationalist and women’s rights activist, founded the Council of Women’s Societies (CWS) whose aim was to be an umbrella body for all women associations in Ibadan.

Adekogbe dedicated her life to creating opportunities for women in political spaces. One of the many things she fought for was women’s suffrage and the allocation of seats for women in the legislature. The 1951 constitution only allowed women who were taxpayers any form of voting rights. Because there were only a few women taxpayers, the representation of women in political settings was low compared to men. In 1954, Adekogbe wrote an article requesting total voting rights for women and more seats for women in the Western Region’s House of Assembly. At the time, only one woman was appointed to the legislature.

As a journalist, Adekogbe frequently wrote articles focused on women’s issues. She published in the Nigerian Tribune, The Daily Times, The West African Pilot, and The Southern Nigerian Defender. One of her articles, ‘Men Who Attend Functions Alone Are Selfish’, was published in the Nigerian Tribune on 02 December 1950, and explored the reasons why men do not attend functions with their wives.

The idea of a man leaving his better half – the wife – behind always when both of them are invited to certain functions and when this wife is physically and mentally fit to attend such functions does leave in the mind of the wife certain unpleasant impressions and memories.

In my opinion, this practice is based on the idea that the ‘HOME’ is the place of a woman. But this saying has lost some of its effects from the point of view of present day occurrences.

Adekogbe was also the producer of a radio programme for the Nigeria Broadcasting Corporation, focusing on topics related to women’s life. She held the chieftaincy title of the Iyalaje of Ikija. She died in Ibadan in 1968 aged 49⎈

As a chieftain of the Yoruba people to which she belonged, she held the title of the Iyalaje of Ikija.

Her husband, L. A. G. Adekogbe, was a civil servant.