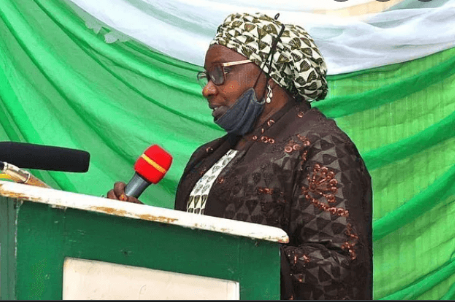 Who is Hadiza Sabuwa Balarabe?

Hadiza Sabuwa Balarabe is a Nigerian politician, she is the deputy governor of Kaduna State, Nigeria. Being the first female deputy-governor of the state. She was elected during the 2019 Nigerian general elections in February under the ruling political party in Nigeria APC.

On 15 October 2019, as acting Governor, she presented the Kaduna State Government’s 2020 Budget of Renewal to the Kaduna State House of Assembly thereby becoming the first woman in Northern Nigeria to do so.

How Old is Hadiza Sabuwa Balarabe?

Dr. Balarabe studied Medicine at the University of Maiduguri, Borno State, from 1982 and obtained the Bachelor of Medicine, Bachelor of Surgery (MBBS) degree in 1988. She did her internship (housemanship) at the Ahmadu Bello University Teaching Hospital, Zaria, from 1988-1989, and later the mandatory national youth service at Police Clinic, Owerri, in Imo state from August 1989 to September 1990.

Dr. Hadiza Sabuwa Balarabe is a registered professional Public Health Physician and Consultant with more than two decades of practice in the public health sector. She began her career in 1990 as a Medical Officer/ Senior Medical Officer I and II at Wuse General Hospital, Abuja, where she served for seven years, from 1991 to 1998. She moved to Ahmadu Bello University Teaching Hospital, Zaria, in December 1998 as Senior House Officer/Registrar and became Senior Registrar. In March 2004, she returned to the FCT as Principal Medical Officer (Epidemiology) in the Department of Public Health, which she held from April 2004- June 2005.

She became Director of Public Health in the FCT in 2014. She held the position until February 2016 when Malam Nasir El-Rufai appointed her as Executive Secretary of the Kaduna State Primary Health Care Development Agency. In 2018, Malam El-Rufai nominated Dr. Hadiza Balarabe as his running mate for the 2019 governorship election. She was sworn in as Deputy Governor on 29 May 2019, the first female to be elected to that office in Kaduna State and the far north of Nigeria. Dr. Hadiza Balarabe is a member of the following professional bodies: Nigeria Medical Association (NMA), Association of Public Health Physicians (APHP), Society for Public Health Practitioners in Nigeria (SPHPN), and Medical and Dental Consultants Association of Nigeria (MDCAN), FCT Chapter.