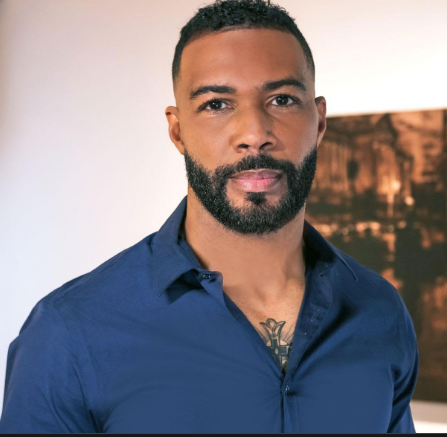 Who Is Omari Hardwick?

Omari Hardwick ( Omari Latif Hardwick) is an American actor, poet, podcaster, producer, and rapper. He is well known for his starring role as James “Ghost” St. Patrick, in the series Power.

In addition, most recently he had a role as Vanderohe in Zack Snyder’s film Army of the Dead (2021). Moreover, he is well known for other roles in films such as Saved and Dark Blue, in Spike Lee’s Miracle at St. Anna in 2008, The A-Team in 2010, Kick-Ass in 2010, Tyler Perry’s For Colored Girls in 2010, and as Andre in BET Network’s Being Mary Jane.

After he graduated from the University, he pursued a career in football, where he had hopes to join the San Diego Chargers. Moreover, Omari went ahead and declared himself for the NFL Draft, however, he was not selected and he decided to go back to acting.

Since he was still an upcoming and a struggling actor he did odd jobs in order to pay for acting courses. Omari began living in his van after failing severally. In 2004, he eventually got his break in the 2004 TV movie Sucker Free City. After that, he landed a role in the feature film The Guardian and as a series regular in Saved. Moreover, in order to fit in that role, Omari spent two years training as a firefighter and paramedic.

Moreover, in 2002, Hardwick had a Quick scene as an extra in Floetry’s “Say Yes” Music Video. In addition, he also participated in award-winning ly in the National Poetry Slam in 2003 and 2004.

In 2010, he became a member and founder of “Plan B Inc Theater Group”. Moreover, he is also a co-founder of ” Actor’s Lounge” at the Los Angeles Greenway Theater. Furthermore, he is also the founder of the production company “Bravelife Films”. Omari was featured in the Urban lifestyle publication, Prominence Magazine for its Holiday issue.

Hardwick’s performance as “Troy” in the highly praised indie movie I Will Follow garnered him his greatest film reviews to date in 2011. In addition, he appeared as Chris Novak, a hard-luck crook approaching prison, in an episode of NBC’s Chase.

As his career started peaking he landed a lead role in the Starz crime drama thriller, Power as James ” Ghost ” St. Patrick. Moreover, he was also featured by a South African rapper Nasty C on a song titled ” A Star Is Born” in 2016. Furthermore, he also co-starred in a science fiction comedy film Sorry to Brother You. In addition, the fiction was released in the theater on July 6, 2018.

Moreover, in July 2019, he landed a role in Zack Synder’s upcoming Netflix film Army of the Dead. In addition, in 2021, it was officially confirmed that Omari was cast as Gordon Oliver in the upcoming Netflix thriller series Pieces of Her. Moreover, the film is adapted from the Karin Slaughter novel of the same name.

How Old Is Omari Hardwick?

He was born in Savannah, Georgia as the son of Joyce and Clifford Hardwick III. His father was serving as an attorney. In addition, he grew up in Decatur, Georgia and he used to write poems while he was still young.

He has two siblings, Jamil Hardwick and Malik Hardwick, though much is not known about them.

Omari attended Marist School high school in Brookhaven, Georgia where he was perfect in baseball, basketball, and football. As a result of being good in the field, he eventually got a football scholarship for the University of Georgia. While at the university he continued in acting and poetry despite him being good in the field. In addition, while at the University he became initiated as a member of Alpha Phi Alpha.

Omari started dating Jennifer “Jae” Pfautch in the late 2000s. Jae, who is of American Native and German descent, was disowned by her family because of dating outside of her race. In 2008, the couple’s first child was stillborn. The two lovebirds subsequently tied the knot in June 2012.

Together with his wife, they have been blessed with two children Brave and Nova.

Adding to his well build body, he stands at an average height of 1.76m tall and weighs 68kgs