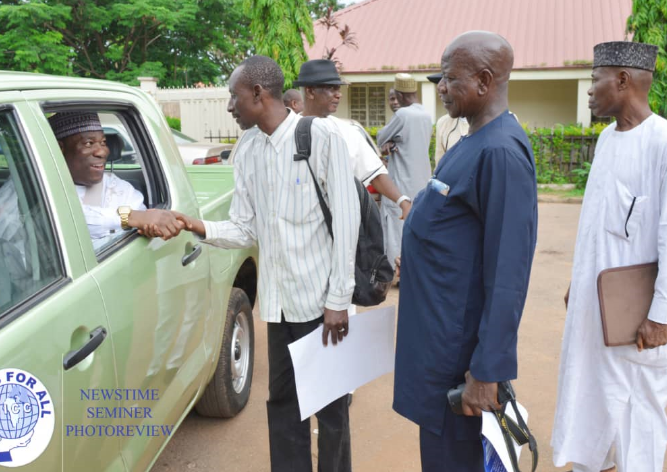 A best-selling author of the book, ‘Leadership’ and CEO of a group dedicated to ensuring a peaceful Nigeria, Newstime Tony Oyatedor has decried the justice system in Nigeria, which he says, punishes the poor and pampers rich people. Oyatedor asserted this on Tuesday in Kaduna during a world press conference in Kaduna, held at the state Secretariat of the Nigeria Union of Journalists (NUJ), Kaduna State Council.

“The justice system pampers the rich, punishes the poor. Blessed (happy, fortunate, to be envied) are those who observe justice (treating others fairly), and who do right and are in right standing with Almighty God. Allah, Jehovah at all times, (not sometimes, Saturdays, Sunday, or Friday) but every day,” he said. The author, in the text of the statement titled, ‘End (Not Crush) Terrorism’ said that the  Leadership understands not, nor appreciates the miracle of God in Nigeria through the abundance of oil, gas, milk, honey, water, etc. “The life of the Nigerian people has too long had its dwelling with leadership who hates peace. The people are for peace, but when leadership speaks they are for war,” he said.

Speaking further at the press conference ahead of national seminars billed for Abuja, Kano, and Lagos, he said that security concerns in the country can be effectively tackled. “Boko Haram is a preventable criminal act. Because the sentence against an evil work is not executed speedily, the hearts of mankind are fully set to do evil to their own destruction. The Word is better than weapons of war. There is moral justice, and there is legal justice. “Whoever mocks the poor, reproaches his or her maker, and he or she who is glad at calamity (Boko Haram and Niger Delta Militancy – twin problems in Nigeria) shall not be held innocent or go unpunished,” he said.

He stressed that  ‘Nigeria has gone from a mere distraction to disaster’. “Weapons of mass distraction everywhere. But there is help and there is hope. Newstime is here to bring peace and security through the Word. Since 2009 leadership has consistently played the “blame game”, but no one has taken the time and trouble and opportunity to seek a remedy. “Newstime has the remedy for the Twin problems. Leadership ignored the admonitions (warning) of Newstime and introduced weapons into the society of Nigeria.  “We repeatedly admonished (warned) the leadership (openly and secretly, privately and publicly) of the prevailing wickedness in the country, but leadership thrust their fingers into their ears and covered their eyes with their garments.

“The people in Nigeria looked for justice, love, unity, light, peace, and security, but behold, all they saw from the leadership was oppression, distress, darkness (NEPA), bloodshed, and destruction. – Hence, the twin problems – Boko Haram and Niger Delta Militancy,” he lamented. He continued, “Of a truth, today as we speak, many houses in the North are desolate, without inhabitants. Destruction of lives and properties everywhere you turn. Weapons may quiet insurgency, but they sure will not stop it, it is only the Word, that will surely end it. The fact will not make the evidence disappear, because 50-plus years later, after doing the same thing over and over again, nothing has changed.

“How can a nation (Nigeria) with so much riches be so poor? Never has a country that should have been so rich been so poor. There is no mystery here, leadership is to blame. Due to wickedness, which is to say that Nigeria is a man-made disaster. Public money that should have been used for the public good was disappearing into private.

“This theft, (corruption) enriched the few but impoverished the many. The time of waging war is over, this is time for making peace that will bring security. Nobody is at peace until everybody is at peace. In Nigeria, self-inflicted stumbling keeps the nation away from progress. “Leadership turned their backs to the Word and not their faces, though we taught them persistently, consistently, openly and secretly, publicly and private yet they would not listen and receive instruction.

“They went in reverse instead of forward. The past leadership did not listen to and obey the Word of the Lord which He spoke through the prophet (Tony Oyatedor). Almighty God foretells through His prophet (Tony Oyatedor). Tony Oyatedor foresees by Divine Inspiration. Every prophet is sent to his nation first, then sent to all mankind,” he added. He suggested that the most effective way to deal with an epidemic (like Boko Haram, Militancy, etc) is preventive, not reactive. ” Newstime has consistently preached preventive but leadership has consistently chosen reactive, hence the destruction of lives and property in the nation.

“Compassionate leadership- means rolling up your sleeves to get the work done. Bring solutions to solve the problems. “In Nigeria, life is undervalued, death is overpriced. (Give examples of burials) Change takes time, change takes commitment, change takes trust, change takes compassion, change takes leadership, and change takes money to materialize.  “Change lakes rolling up your sleeves to do the work, not blame game and waiting for miracles (“Na only God go help us syndrome”,) Work, work, work, is the only solution (John 5:17) It is not easy but it is doable ( Insha Allah, by the favor of Almighty God ). We have to heal the nation – Nigeria. “By a prophet, Almighty God brought Israel out of Egypt, and by a prophet was Israel preserved.  As it was them, so it is now. By a prophet (Tony Oyatedor) Almighty God brought warning (admonition) to Nigeria, saying “prevention is better than cure, if you prevent it today, you do not need to cure it tomorrow,” And by a prophet (Tony Oyatedor) will Nigeria he preserved and restored with restoration.

Peace Ambassador Urges FG to End Boko Haram, Militancy Without Use of Forces

“Nigeria has been crippled and brought to her knees by the evil twins- 1) Boko Haram, 2) Militancy, the twin problems that could have been prevented and brought to a screening halt. “When someone is struggling, you do not turn away or take advantage. Hunger and pains have taken the people of Nigeria like a woman in labor (in childbirth) from a preventable crisis if only the people and past leadership took heed and obeyed the Word of Almighty God from the man of God. (Tony Oyatedor) over and over again,” he submitted.