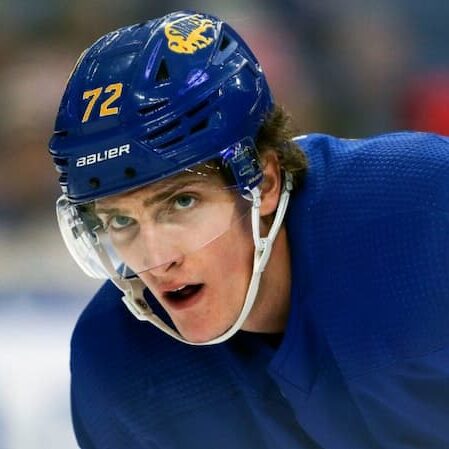 Who is Tage Thompson?

Tage Nathaniel Thompson is a professional American ice hockey center for the Buffalo Sabres of the NHL (National Hockey League). He was selected by the St, Louis Blues 26th overall in the 2016 NHL Entry Draft.

How Old Is Tage Thompson?

Who are Tage Thompson’s Parents?

He was born to Brent Thompson (Father, born on January 9, 1971) a Canadian former professional defenceman who played 121 games in the NHL. And Kimberly Oliver Thompson (Mother).

Does Tage Thompson have Siblings?

He has a younger brother by the name Tyce Thompson (born on July 12, 1999) an American professional ice hockey center.

He received his high school education at Pioneer High School where he graduated. After graduating from high school, he attended The University of Connecticut.

He is married to the love of his life Rachel Stackpole Thompson.

He and his wife Rachel have one kid. A son by the name of Brooks.

After playing in the U.S. National Development Team in the United States Hockey League, he went on and embarked on a collegiate career with Connecticut in the Hockey East conference. In 2015-16, he appeared in all 36 games during his freshman season at UConn and was second on the team with 32 points on 14 goals and 18 assists. Moreover, he led the nation with 14 power-play goals. After his selection by the Blues in the draft, in the 2016-17 season, he appeared in 34 games with the Huskies as a sophomore.

However, he missed two games while participating with Team USA in the IIHF World Junior U20 Championship in Canada which resulted in him earning his second Gold Medal. During his 34 games, he led the Huskies with 19 goals and 32 points. After the completion of the Huskies season, he opted to conclude his collegiate career and went on to sign a three-year, entry-level contract with the St. Louis Blues on March 7, 2017. Immediately he joined the Blues affiliate, the Chicago Wolves of the AHL, on an amateur try-out contract for the remainder of the 2016-17 season.

On October 4, 2017, he made his NHL debut in the Blues’ first game of the 2017-18 season against the Pittsburgh Penguins. With the Blues. he played four NHL games before being sent down to the San Antonio Rampage on October 13, 2017. On December 18, 2017, he was recalled to the NHL. And went on to score his first NHL goal three days later in a 3-2 loss against the Edmonton Oilers. He was then part of a trade by the Blues on July 1, 2018, that sent Vladimir Sobotka, and Patrik Berglund. A 2019 first-round draft pick and a 2021 second-round draft pick to the Buffalo Sabres This was in exchange for Ryan O’Reilly.

As a restricted free agent, on October 5, 2020, he signed a three-year, $4.2 million contract extension with the Sabres. He enjoyed a breakout season even though he entered the season with low expectations for the Sabres. As played on the top line with Jeff Skinner and new acquisition Alex Tuch scoring 38 goals and 68 points in 78 games. In a game against the Columbus Blue Jackets on December 7, 2022, he scored 5 goals in a game. Including 4 in the first period which had only been done three other times in NHL history. This made him become only the second American-born player to score five times in a game. The first one, Mark Pavelich did it 39 years ago.

Tage Thompson’s Salary and Net Worth