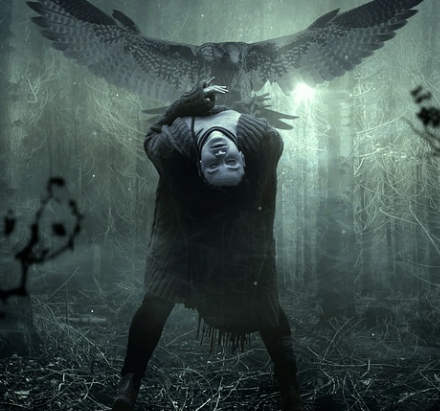 Angel and demon, the demon also spelled daemon, respectively, any benevolent or malevolent spiritual being that mediates between the transcendent and temporal realms.

Spiritual beings, when regarded as benevolent, are usually called angels in Judaism, Christianity, and Islam, and those viewed as malevolent are termed demons.

The term angel, which is derived from the Greek word Angelos, is the equivalent of the Hebrew word Mal’akh, meaning “messenger.” The literal meaning of the word angel thus points more toward the function or status of such beings in a cosmic hierarchy rather than toward connotations of essence or nature, which have been prominent in popular piety, especially in Western religions.

The term demon is derived from the Greek word daimōn, which means a “supernatural being” or “spirit.” Though it has commonly been associated with evil or malevolent spirits, the term originally meant a spiritual being that influenced a person’s character.

In religions of nonliterate peoples, spiritual beings may be viewed as either malevolent or benevolent according to the circumstances facing the individual or community.

In Christian tradition, demons are fallen angels and have the same characteristics as their good angel counterparts.

Intermediate beings between the sacred and profane realms assume various forms in the religions of the world: celestial and atmospheric beings; devils, demons, and evil spirits; ghosts, ghouls, and goblins; and nature spirits and fairies.

Angels and demons are generally conceived as celestial or atmospheric spirits. In the popular piety of these religions, however, there is a widespread belief in ghosts, ghouls, goblins, demons, and evil spirits that influence humans in their terrestrial condition and activities.

Christianity, probably influenced by the angelology of Jewish sects such as the Pharisees and Essenes as well as of the Hellenistic world, further enhanced and developed theories and beliefs in angels and demons. In the New Testament, celestial beings were grouped into seven ranks: angels, archangels, principalities, powers, virtues, dominions, and thrones.

Angelology and demonology in Islam are closely related to similar doctrines in Judaism and Christianity. Besides the four throne bearers of Allah, four other angels are well known: Jibrīl (Gabriel), the angel of revelation; Mīkāl (Michael), the angel of nature, providing humans with food and knowledge; ʿIzrāʾīl, the angel of death; and Isrāfīl, the angel who places the soul in the body and sounds the trumpet for the Last judgments.

There are instances in the Bible where angels have the ability to heal an individual from impurity.

In Islam, angels (malāʾik or malāʾikah) are believed to be heavenly beings, created from a luminous origin by God. They have different roles, including their praise of God, interacting with humans in ordinary life, defending against devils, and carrying on natural phenomena.

The angels differ from other spiritual creatures in their attitude as creatures of virtue, in contrast to devils and jinn.

Angels play an important role in Muslim everyday life by protecting the believers from evil influences and recording the deeds of humans.

Except in some monotheistic religions, all demons are not assumed to be evil. Many kinds of spiritual.

Demons are far more powerful than humans, though their powers are limited and they are longer-lived, though not necessarily immortal. Demons often seem to be the anthropomorphic conceptualization of discrete, invisible natural forces that are perceptible mainly through their effects, such as wind or specific diseases. In prescientific cosmologies, air, wind, and the “breath” (spiritus) of life are usually conceived as invisible or even immaterial. As spirits, demons are normally invisible, becoming perceptible either through their effects on humans or through language or signs. When becoming visible, demons may exhibit their own inherent shapes or assume familiar or monstrous forms.

In some religions (particularly Judaism, Christianity, and Islam), demons may be identified with or compared to angels or devils.

The daimon’s character may be good, evil, or changeable, but late Judaism and Christianity eventually define demons as profoundly, irredeemably evil.

Angels denote a messenger and were originally applicable to humans as well as superhuman envoys. In Judaism and Christianity, the angel is a spirit messenger sent to humans by the god, but the term could include other functions, such as rewarding or punishing humans.

In Hinduism, the question of gods and demons reflects a complex, multimillennial history of religious and cultural beliefs.

3 myths about Angels and Demons.

Difference between Angels and Demons.