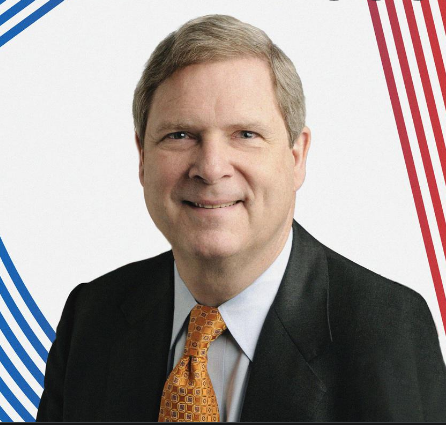 Who is Tom Vilsack?

Tom Vilsack, born Thomas James Vilsack is an American politician, currently, he is serving as the 32nd US Secretary of Agriculture. In addition, he is an attorney, he was appointed Secretary of Agriculture in 2021 under President Joe Biden’s Administration. As a politician, he is a member of the Democratic Party and served as the 40th governor of Iowa from 1999 to 2007.

As a politician, he offered to support Joe Biden in his presidential race in 1988 alongside his wife. Moreover, in December 1986, the Mayor of Mount Pleasant was shot dead. After that, he spearheaded a fundraising drive to build a memorial fountain.

Vilsack was asked to run for mayor of Mount Pleasant by the dead mayor’s father. He won the election and began serving in 1987. After that, in 1992, he was elected to the Iowa Senate. Following his election, he worked on legislation mandating businesses who received state tax breaks to deliver greater pay and benefits to their employees.

Moreover, Vilsack played a huge role in passing a law requiring workers to be covered by health insurance when they change jobs. In addition, the bill was also restructuring Iowa’s Workforce Development Department. He also introduced legislation that would require the state of Iowa to cover half of local county mental health costs.

How Old Is Tom Vilsack?

Vilsack was born in a Roman Catholic orphanage in Pittsburgh Pennsylvania. He was adopted by Budd and Dolly Vilsack in 1951, Budd was a real estate agent and insurance salesman. In addition, his biological mother was 23 years old when she gave birth to him and she was working as a secretary.

He doesn’t have any known siblings

He graduated from Shady Side Academy, a preparatory high school in Pittsburgh. After that, he received his bachelor’s degree in 1972 from Hamilton College. While at Hamilton, he joined the Delta Upsilon fraternity. Vilsack went ahead and enrolled in Albany Law School, where he received his Juris Doctor in 1975.

He is married to Ann Christine, the two met in 1968 in Cafeteria while at Hamilton College in New York. Soon after meeting, they started dating. They tied the knot on August 18th, 1973.

They have been blessed with two sons, Jess, and Doug.

He declared his bid to run for the gubernatorial seat after Terry Branstad decided to not seek reelection in 1998. The Iowa Republican party elected Jim Ross Lightfoot, former US Representative. On the other hand, Vilsack won the Democratic ticket after defeating Mark McCormick. He then went ahead and appointed Sally Pederson as his running mate.

Lightfoot was seen as a potential candidate to succeed Branstad, with polls continually showing him as the front-runner. However, Vilsack did the imaginable after he won the general election by a razor-thin margin. His win made him the first Democrat to serve as governor of Iowa in thirty years and only the fifth Democrat to do so in the twentieth century.

After serving for the first term he was reelected in 2000 after he defeated Republican nominee  Doug Gross. Moreover, Vilsack went ahead and used a line-item veto in the first year of his second term to create the Grow Iowa Values Fund. This was $503 million appropriations assigned to boost the Iowa economy by providing grants to corporations and initiatives committed to creating higher-paying jobs. However, it was later ruled unconstitutional by the Iowa Supreme Court.

Moreover, during his tenure as the governor, Republicans were the ones controlling the Iowa General Assembly for the majority of. The fifty-member Senate was evenly split between Democrats and Republicans after the November 2, 2004, elections, and Republicans enjoyed a 51–49 majority in the House of Representatives.

Vilsack signed an executive order in July 2005 allowing all convicts who had completed their terms to vote. Around 115,000 felons were able to reclaim their voting privileges. Moreover, prior to the order convicted felons were disenfranchised, but they could petition the governor to begin the process of restoring their ability to vote, which usually took six months.

Moreover, during the 2004 presidential election, he was seen as a potential running mate for Kerry. In addition, in 2005, he established Heartland PAC, a political action committee. The focus of the committee was to elect Democratic governors. Moreover, in the first report, he managed to raise more than $5oo thousand. In 2007 he left the office of the governor after serving for 9 years.

Prior to stepping down as the governor, he had announced his interest to run for a presidential seat during the 2008 election on November 30th, 2006. He became the second Democrat to declare his bid after Mike Gravel.

Moreover, his campaign made important use of social media, where he maintained an active MySpace profile. The profile was a collection of viral video clips on Youtube, a Facebook profile, video blog on blip.tv, and also a conference call with podcast site TalkShoe.

On January 27, 2007, Vilsack spoke on Kurt Hurner’s Regular Guys Show for a 15-minute chat about his bid for the Democratic presidential nomination in 2008. Since then, Vilsack has appeared on the show, now known as The Kurt Hurner Show at Talk Shoe, on August 12, 2008, as a supporter of Barack Obama for president, addressing questions from listeners for 30 minutes.

However, he later stepped down from the race and decided to support Senator Hillary Clinton. He was then appointed as the national co-chair for Clinton’s presidential campaign.

He was nominated as the 30th secretary of agriculture on December 17th, 2008 by then-president Barack Obama. Vilsack governed a predominantly agricultural state, compared to the previous two Secretaries of Agriculture, Mike Johanns, and Ed Schafer. On January 20, 2009, the Senate unanimously approved Vilsack’s nomination for the position.

Agricultural groups overwhelmingly endorsed Vilsack’s nomination. These groups included the Corn Refiners Association, the National Grain and Feed Association. In addition, the National Farmers Union, the American Farm Bureau Federation, and the Environmental Defense Fund also endorsed him. Moreover, Vilsack was the founder and former chair of the Governor’s Biotechnology Partnership, and the Biotechnology Industry Organization, an industry lobbying group, named him Governor of the Year.

2021 Nomination as Secretary of Agriculture

As a result of his work in the agricultural sector during the Obama administration. In December  2021, Joe Biden announced his intention to nominate Tom as Secretary of agriculture.

However, the decision was condemned by some of the farmers. This criticism was Because of Vilsack’s perceived ties to the status quo and corporate agriculture. On February 2, 2021, he went before the Senate Agriculture Committee and was unanimously approved. The Senate confirmed his candidacy on February 23, 2021, by a vote of 92–7. On February 24, 2021, he was sworn in by Vice President Kamala Harris.

He stands at an average height of 1.83m tall and weighs 85kg.

His net worth is estimated to be more than $5 million.