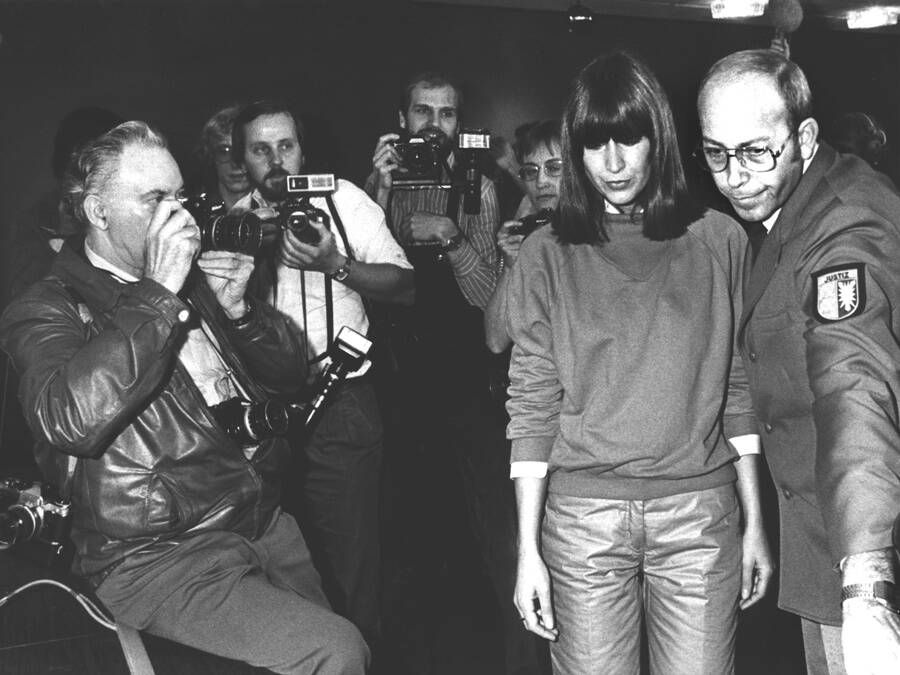 n March 6, 1981, Marianne Bachmeier opened fire in a crowded courthouse in what was then known as West Germany. Her target was a 35-year-old sex offender on trial for her daughter’s murder, and he died after taking six of her bullets.

Immediately, Bachmeier became an infamous figure. Her subsequent trial, which was followed closely by the German public, begged the question: was her effort to avenge her slain child justified?

Cornelia Gus/picture alliance via Getty ImagesMarianne Bachmeier was sentenced to six years in prison after shooting her daughter’s rapist and killer in a courtroom.

Forty years later, the case is still remembered. German news outlet NDR described it as “the most spectacular case of vigilante justice in German post-war history.”

Patrick PIEL/Gamma-Rapho via Getty ImagesBachmeier’s case divided public opinion: was the shooting an act of justice or was it dangerous vigilantism?

Before she was christened as Germany’s “Revenge Mother,” Marianne Bachmeier was a struggling single mom who ran a pub and in 1970s Lübeck, a city in what was then West Germany. She lived with her third child, Anna. Her two older children had been given up for adoption.

Anna was described as a “happy, open-minded child,” but tragedy struck when she was found dead on May 5, 1980.

According to NDR, the seven-year-old had skipped school after an argument with her mother that fateful day and somehow found herself in the hands of her 35-year-old neighbor, a local butcher named Klaus Grabowski who already had a criminal record involving child molestation.

Investigators later learned that Grabowski had kept Anna at his home for hours before he strangled her with pantyhose. Whether or not he sexually assaulted her remains unknown. He then stashed the child’s body in a cardboard box and left it on the bank of a nearby canal.

Grabowski was arrested that same evening after his fiancé alerted the police. Grabowski confessed to the murder but denied that he abused the child. Instead, Grabowski gave a strange and disturbing story.

The killer claimed that he strangled the little girl after she tried to blackmail him. According to Grabowski, Anna tried to seduce him and threatened to tell her mother that he had molested her if he didn’t give her money.

Marianne Bachmeier was incensed by this story and a year later, when Grabowski headed to trial for the murder, she had her revenge.

Grabowski’s trial was likely a heartache for Bachmeier. His defense attorneys claimed he had acted out of a hormonal imbalance that was caused by hormone therapy he received after being voluntarily castrated years earlier.

At the time, sex offenders in Germany often underwent castration to prevent recidivism, though this wasn’t the case for Grabowski.

On the third day of the trial in Lübeck district court, Marianne Bachmeier grabbed a .22-caliber Beretta pistol from her purse and pulled the trigger eight times. Six of the shots hit Grabowski, and he died on the courtroom floor.

During her trial, Bachmeier testified that she shot Grabowski in a dream and saw visions of her daughter in the courtroom. A doctor who examined her said that Bachmeier was asked for a handwriting sample, and in response, she wrote: “I did it for you, Anna.”

She then decorated the sample with seven hearts, perhaps one for each year of Anna’s life.

“I heard he wanted to make a statement,” Bachmeier later said, referring to Grabowski’s claims that her seven-year-old was trying to blackmail him. “I thought, now comes the next lie about this victim who was my child.”

In addition to the case’s ethical conundrum, there was also a legal debate about whether the shooting was premeditated or not and whether it was murder or manslaughter. Different rulings carried different punishments. Decades later, a friend featured in a documentary about the case claimed to have witnessed Bachmeier perform target practice with a gun in her pub cellar before the shooting.

The court ultimately convicted Bachmeier of premeditated manslaughter and sentenced her to six years behind bars in 1983.

Wulf Pfeiffer/picture alliance via Getty ImagesAfter her death, Marianne Bachmeier was buried next to her daughter in Lübeck.

According to a survey by the Allensbach Institute, a majority of 28 percent of Germans deemed her six-year sentencing as an appropriate penalty for her actions. Another 27 percent considered the sentence too heavy while 25 percent viewed it as too light.

In June 1985, Marianne Bachmeier was released from prison after serving only half of her sentence. She moved to Nigeria, where she married and remained until the 1990s. After she divorced her husband, Bachmeier relocated to Sicily where she stayed until she was diagnosed with pancreatic cancer, upon which she returned to a now-unified Germany.

With precious little time left, Bachmeier requested Lukas Maria Böhmer, a reporter for NDR, to film her last weeks alive. She died on Sept. 17, 1996, at the age of 46. She was buried next to her daughter, Anna.